in the heart of the forest

The Castle is situated on the little hill which is 231 m. high where the Sellate stream meets with the Botro al Rio in what is now the forest of Berignone.
It was founded in the Middle Ages by the bishops of Volterra who were its owners for centuries. It has been known since 990 when it was located in the centre of a densely populated area. It was an important centre for the control of the territory for a long time as well as a residence of the bishops of Volterra.

In the 13th century it was also the site of the mint of the bishops of Volterra who minted coins with the silver of the bishops’ mines of Montieri.
In the 14th century it fell under the control of the municipality of Volterra. Today only part of the tower and a few fragments of the walls are still standing, and you can see some traces of the village, partly hidden by woodland.

In 1218 it was first destroyed by the soldiers of the town of Volterra, but soon rebuilt; in 1235 the Bishop Pagano Pannocchieschi was besieged by the troops of Volterra and the same happened in 1267 to the Bishop Alberto degli Scolari.
The castle consists of a fortified core, the donjon, composed of a tower, which is the only building partly standing, and of other brick structures; from the existing openings we can guess that the tower must have had at least three floors above the ground floor. In the basement there is a room which must have been a cellar or a warehouse. A wall guarded this area of the castle.

Beyond this wall there was the village, composed of numerous buildings whose outlines can be traced on the ground; we do not exactly know the extent of the inhabited area because of the woods that have grown over it. It is not even possible to determine whether the village had a defence wall. 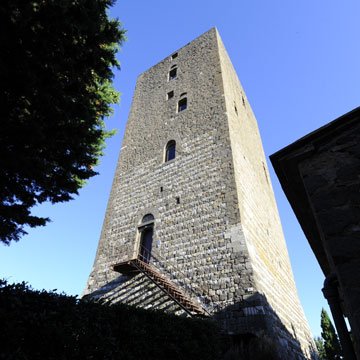 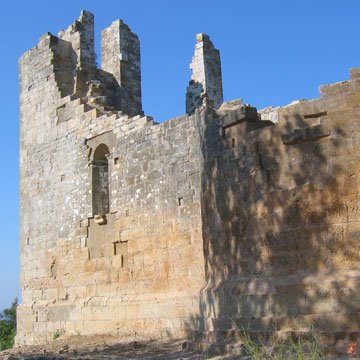 Abbey of St Peter in Palazzuolo