Etruscan remains in the center of Volterra

The acropolis tells the most ancient stories of Volterra and its area, inhabited for millennia

Archeological excavations on the top of the hill where Volterra lies led to the discovery of a sanctuary compound with temples and other supporting buildings, which were used between the 7th century b.C. and the 3rd century a.D..

Since the city’s origins the acropolis, the highest part of the hill, has been used as a place of worship for Volterra’s community. The Etruscans chose areas with a far view for their temples, so that they could best interpret the future through the signs they saw in the sky (birds flying and lightnings).

Many temples were built throughout the centuries, but the remains we have today are the basements and the supporting buildings of two temples from the Hellenistic period, between the 3rd and the 2nd century b.C. That must have been the busiest period of the area, and many new compounds were built as support for the temples’ activity.

The Etruscan buildings were made using perishable materials such as wood and clay, which didn’t survive the passing of time. Because of this, in Volterra as well as in other cities, we only have a few remains of the majestic and vastly decorated buildings.

Next to the archaeological site of the Acropolis there is a Roman Cistern. Improperly known
as the “pool”, the Roman Cistern was built in the 1st century B.C. during the Augustan Age and it was used as a water tank. Rainwater was collected from the buildings of Piano di Castello, and it provided water for the underlying neighborhoods of the city.
The Roman Cistern was used in 1965 by the film director Luchino Visconti to shoot some scenes of “Sandra-Of a Thousand Delights “ starring Claudia Cardinale and Jean Sorel. 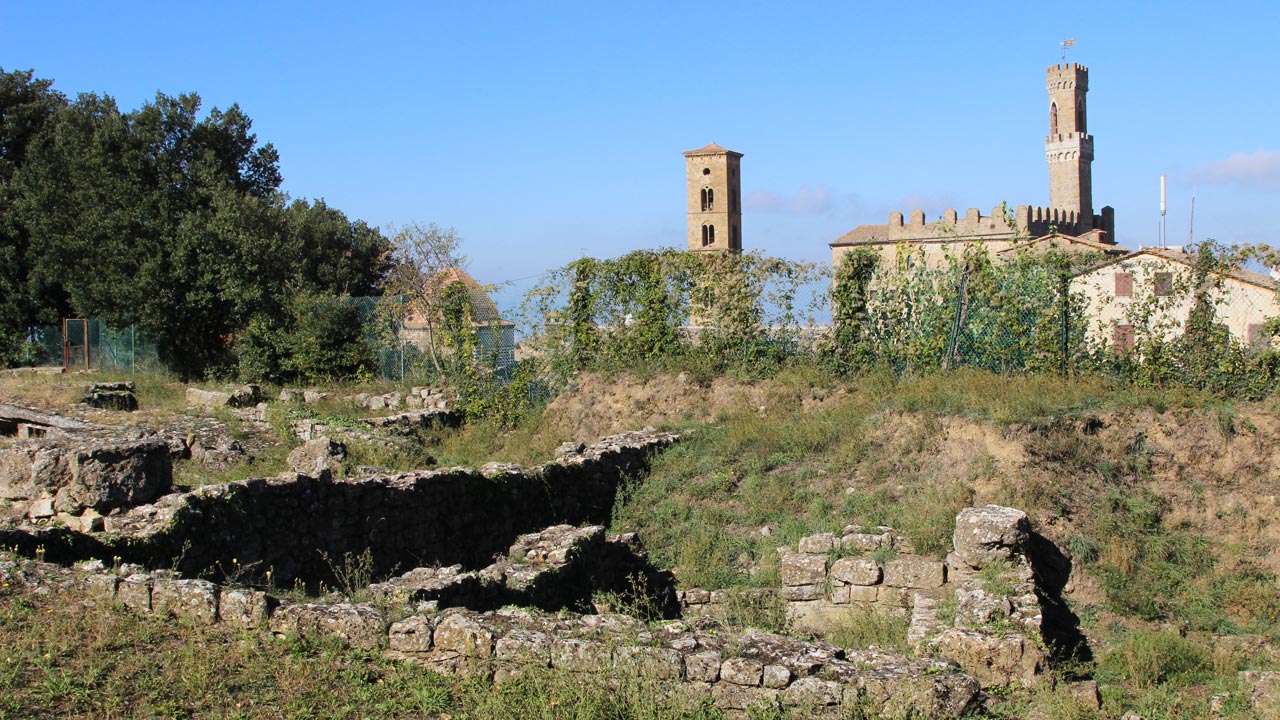 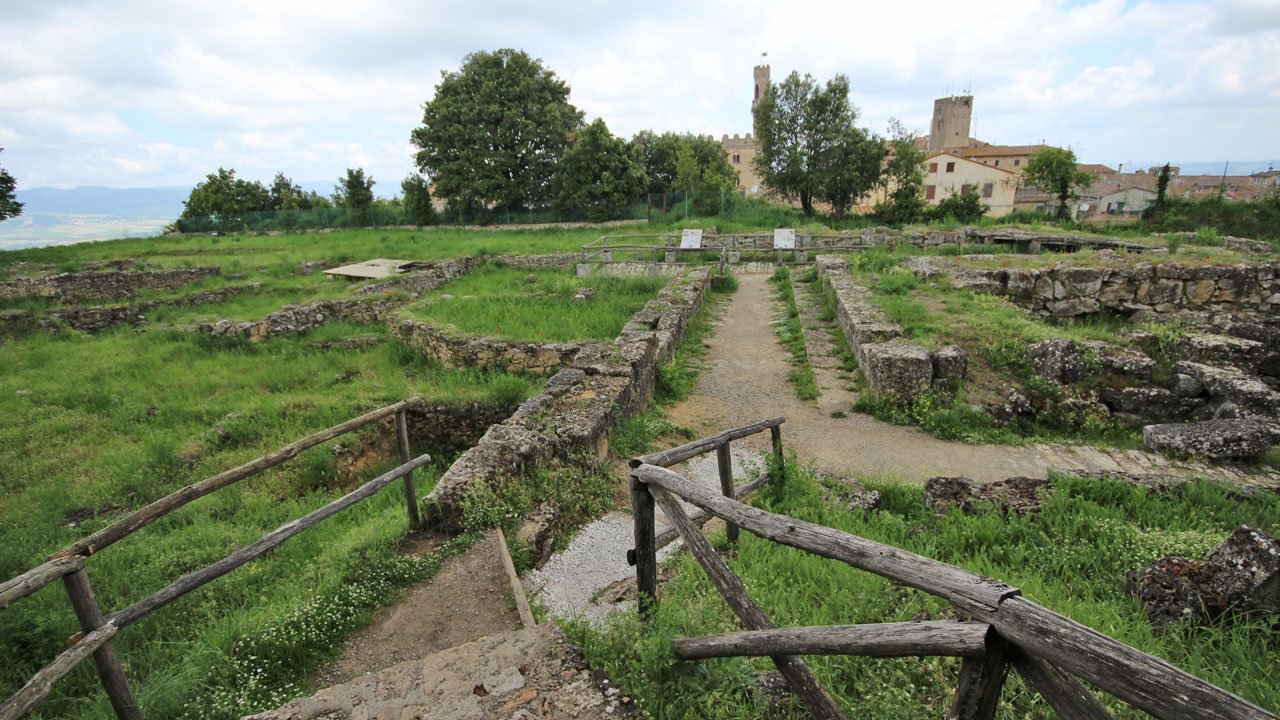 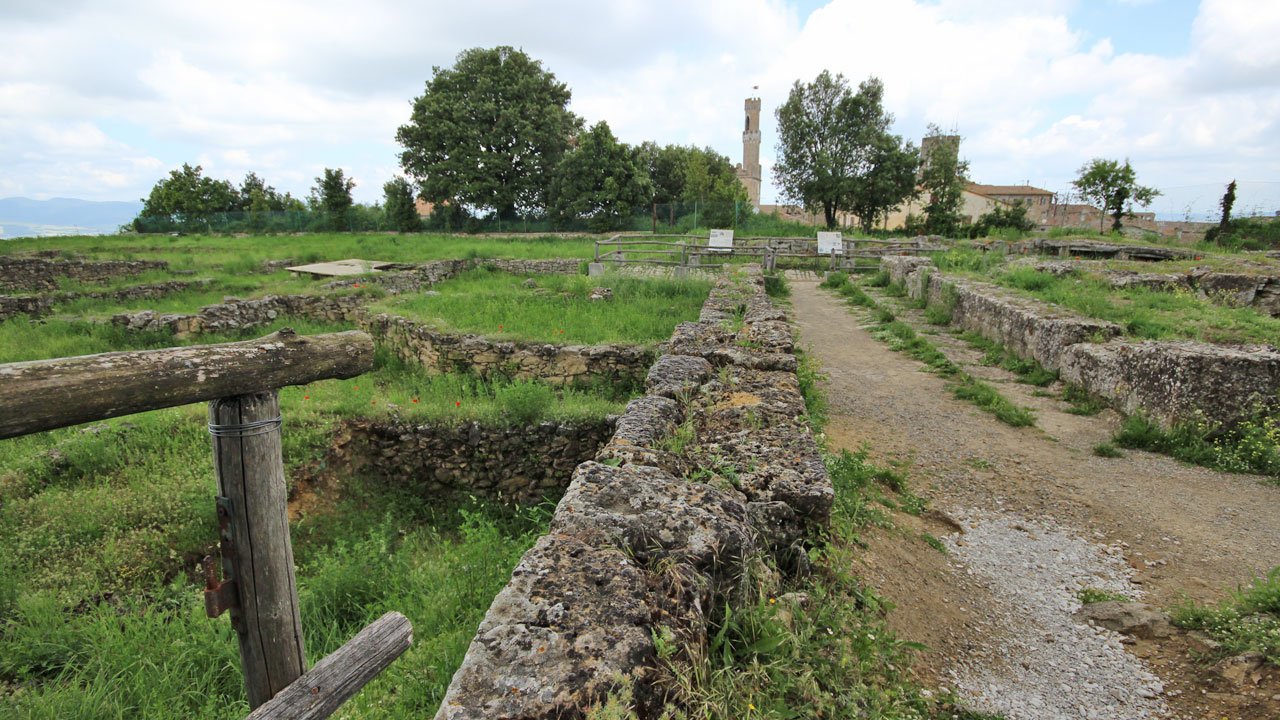 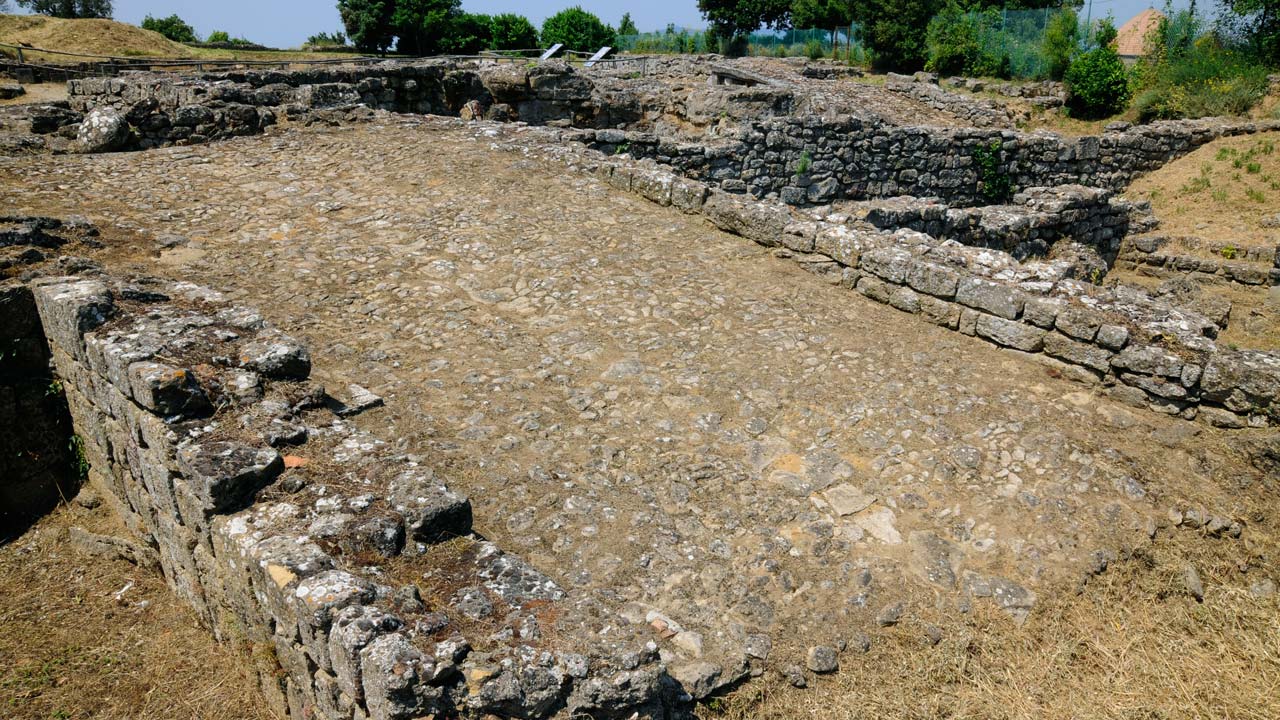 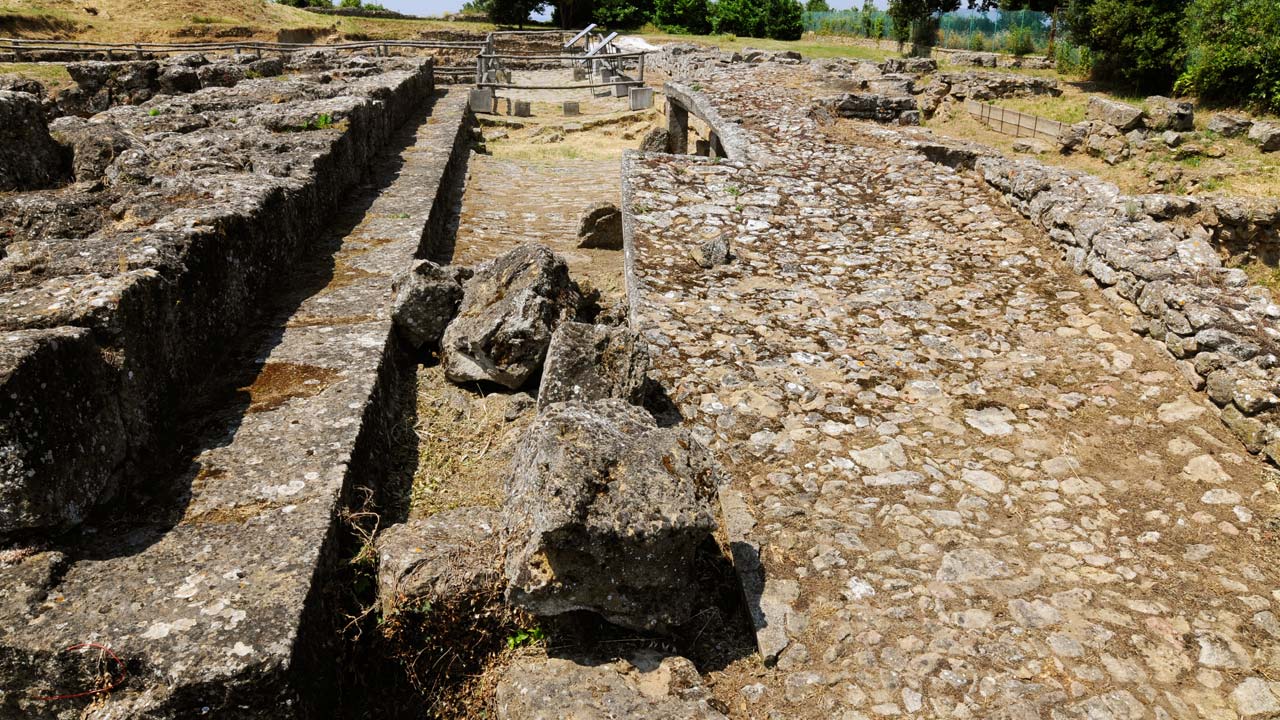 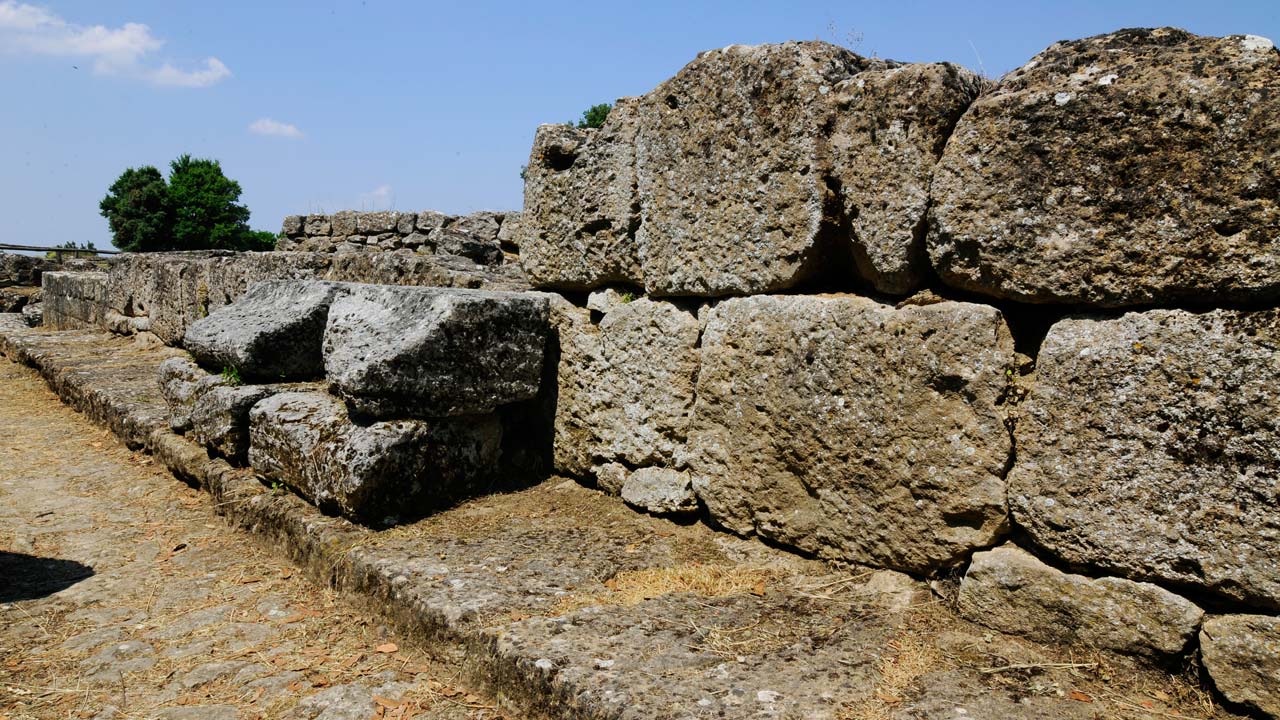 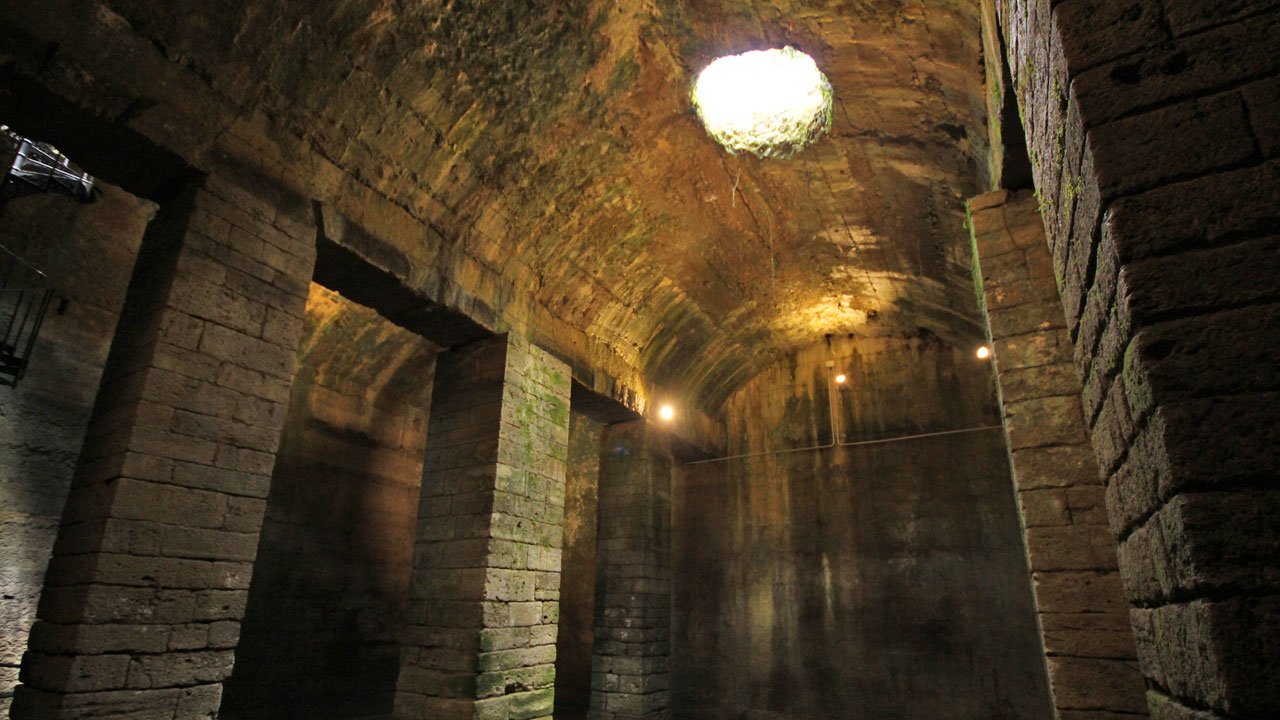 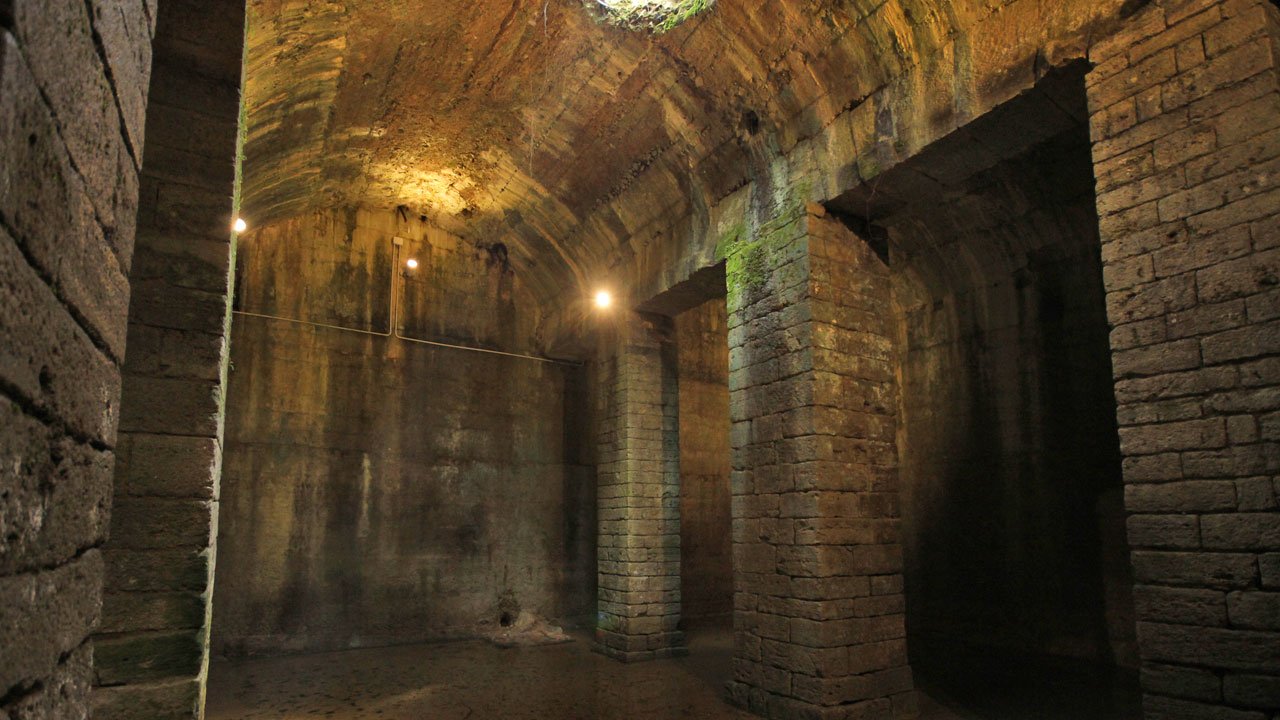 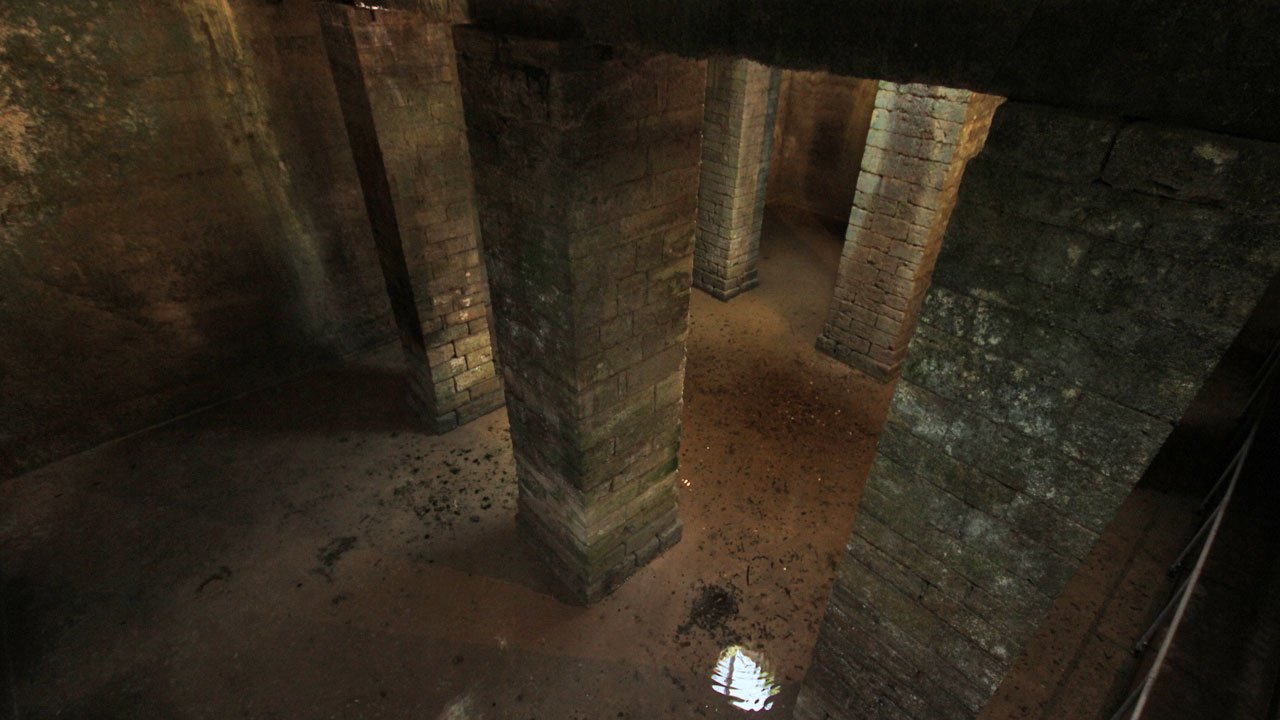 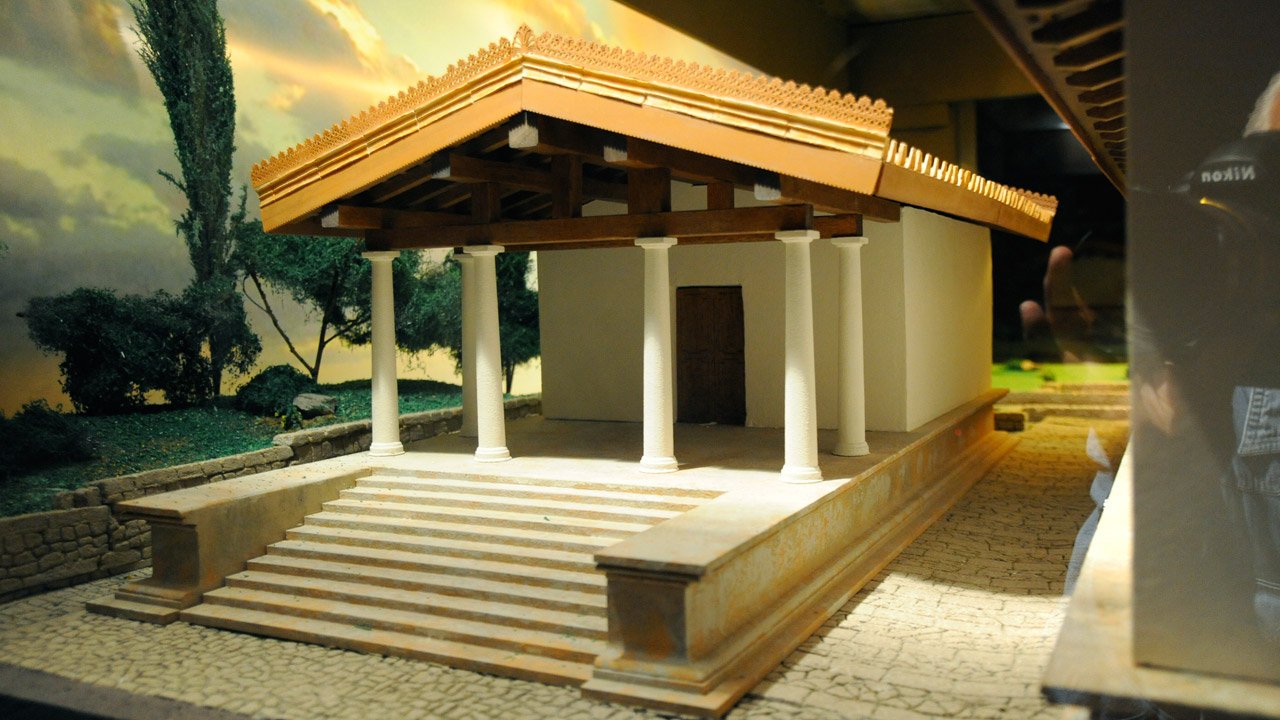 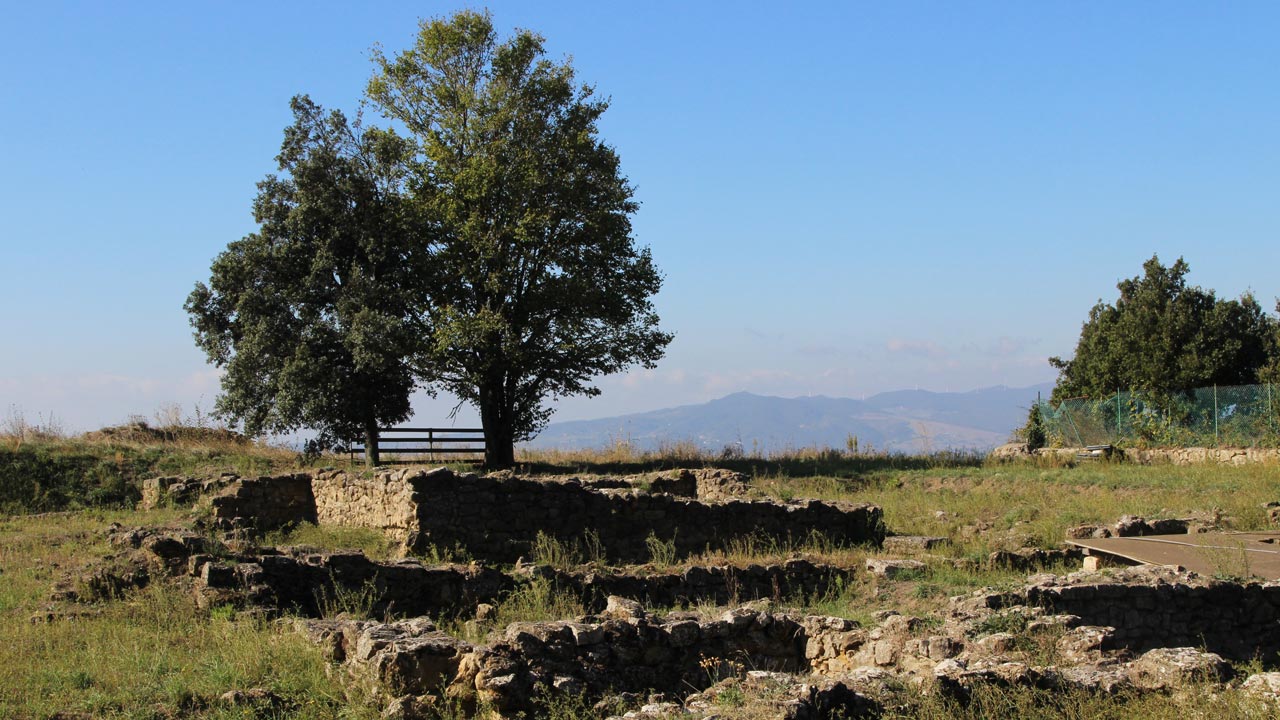 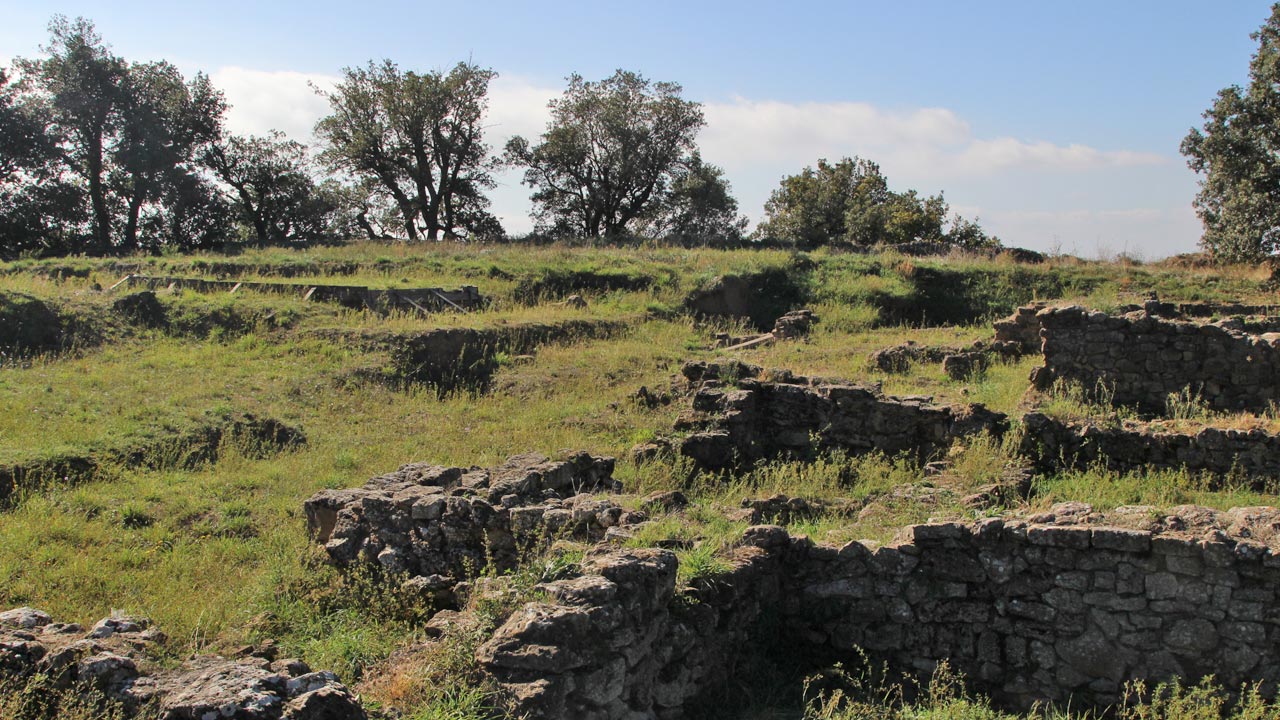 with a view over the area around it, down until the sea

The excavations of the acropolis brought to light a whole district intended for religious activity. Starting in the 6th century b.C., places of worship and other connected services like storage rooms and accommodations for the religious were built.

The most complex building phase was the one in the Hellenistic period (3rd-2nd century b.C.). Two religious buildings, called temple A (alpha: α) and temple B (beta: β), and other supporting buildings such as tanks for the collection of rainwater date back to then.

A fresco was discovered inside a building on the West border of the area, dating back to the 2nd century b.C. It is full of vibrant colours such as green, red, black, yellow, white and purple arranged in a geometrical design as a decoration. A part of this discovery, which is exceptional for the whole Etruria, can be found in the Guarnacci museum.

The temple A, dating back to the second half of the 2nd century b.C., which makes it more recent than temple B, is inspired by Greek temples in its shape. It included a closed cell surrounded by columns on three sides, and a frontal part which was accessed through a stairway. Some blocks of the material covering the podium made out of grey molded sandstone and a few elements of the architectural decorations are what’s left of it. From the podium, one could access the 8-meters-deep tank containing the water that was used for the rituals.

The temple B, dating back to the second half of the 3rd century b.C., is located on the North border of the area. Unfortunately, most of it got lost because of a hole underneath it. It was surrounded by a wall called “di Temenosio” that, just like in temple A, separated the sacred area from the rest. It was a building of the Tuscan order, typical Etruscan. It was made up of two equally big parts: a closed cell in the back with three rows of four columns on the front. The temple stood on a podium, accessible by a stairway. The materials it was built with are wood and clay, which are perishable, whereas the part covering the building was made out of tiles and hand-modelled terracotta, some of it kept in the Guarnacci museum.

The sanctuary area was built so that rainwater could be collected. A water-collecting system had to be built in order to provide the whole area with water, because of the lack of springs on the top of the hill. Rainwater was channeled from the roofs and in the open area in front of the temples towards big stone tanks, and it was then used either during the religious ceremonies or for supply during droughts.

Visit the acropolis, the archeological park and the Medicean fortress

DISCOVER THE PARK AND THE FORTRESS