A proud and beautiful town

Palazzo dei Priori, the political life core of the old town of Volterra, is a majestic example of the power of the city

The most ancient palace in the Piazza dei Priori is the Palazzo dei Priori, the present day Town Hall designed by Richard of Como.
The building work began in 1208 and was completed in the middle of the 13th century.

The façade has suffered several changes throughout the centuries. In 1472 when Volterra lost its administrative freedom, the loggia was demolished and the two entrances on the right closed. The terracotta coats of arms commemorate the commissioners who governed the city and the two lions are a symbol of Florentine rule. Between the windows on the ground floor, engraved on the wall, is the ancient measurement of the commune the “Canna Volterrana“.
The windows on the second and third floors still preserve their original Romanesque structure while those on the first are trilobed mullioned windows with a slightly pointed arch.
The clock hinders the uniformity of the façade as it was added at a later date as was the crenellation which crowns the palace.

The original tower terminated at the first crenellation and was once surmounted by a wooden bell tower but after the earthquake in 1846 it was rebuilt in stone.
The entrance has a cross vaulted ceiling and is adorned with coats of arms and glazed medallions. Along the stairway leading up to the first floor there is a fresco of the Crucifixion by Pier Francesco Fiorentino (15th century).
At the top of the first flight of stairs you enter directly into the magnificent Council Hall. The cross vaulted ceiling replaced the beamed ceiling in 1516. On the wall at the far end of the hall there is a fresco painted by Jacopo di Cione Orcagna completed in 1383. While the fresco was being transferred to canvas the sinopia now displayed in the antechamber were discovered. The fresco depicts the Annunciation with four saints, on the left Cosma and Damian and on the right Giusto and Ottaviano.
On the right wall a canvas painting “the Wedding of Cana” by Donato Mascagni, knick named Monk Arsenio (1579-1631).
In the antechamber you can admire “Job” by Mascagni, “Nativity of Mary” by Gian Domenico Ferretti (18th century), the 18th century “Adoration of the Magi” by Ignazio Hugford; worth noting “San Girolamo” transferred to this room from the stairway and attributed to Luca Signorelli. Two splendid works by contemporary Volterran artists; “The Little Calf” by Raffaello Consortini and “The Sicilian Woman” by Mino Trafeli. 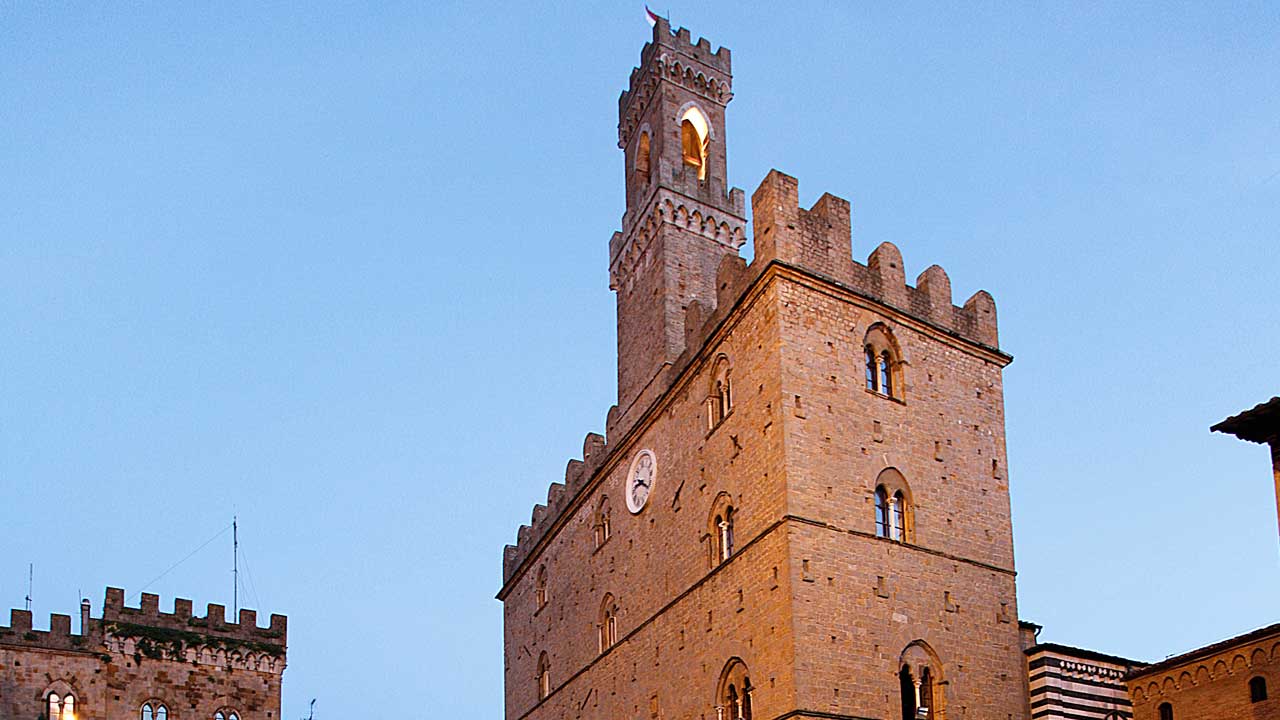 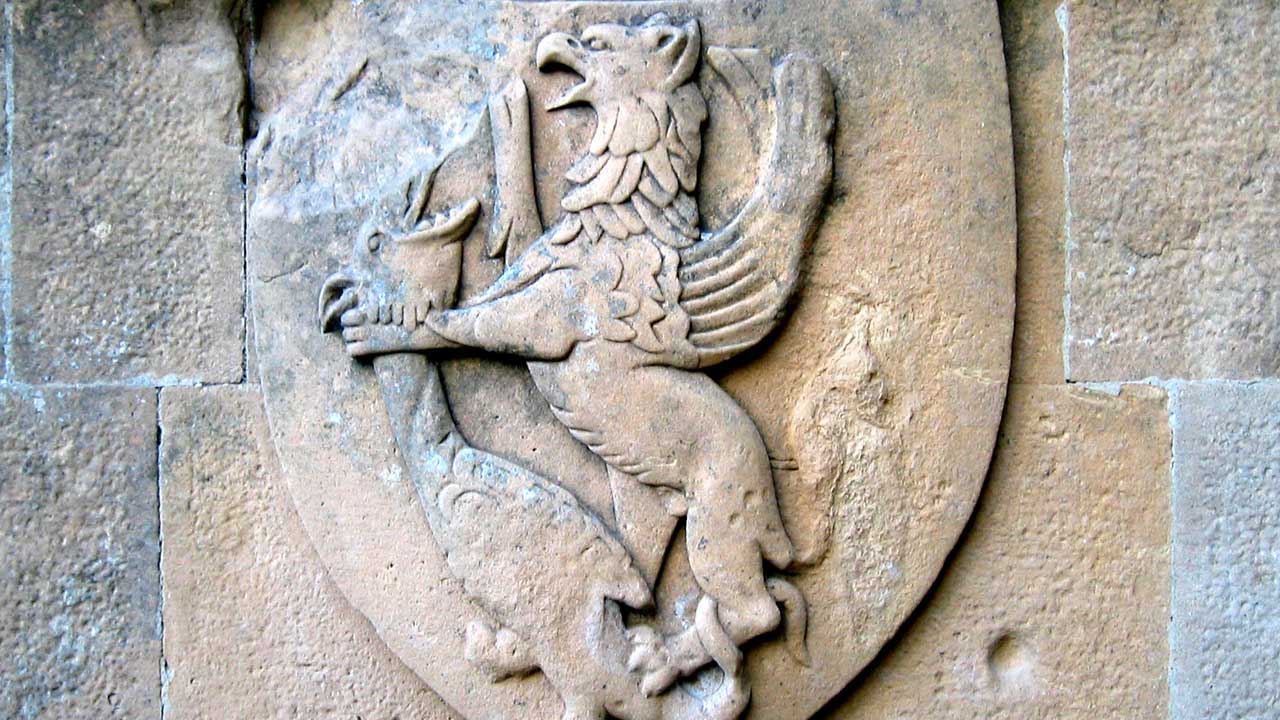 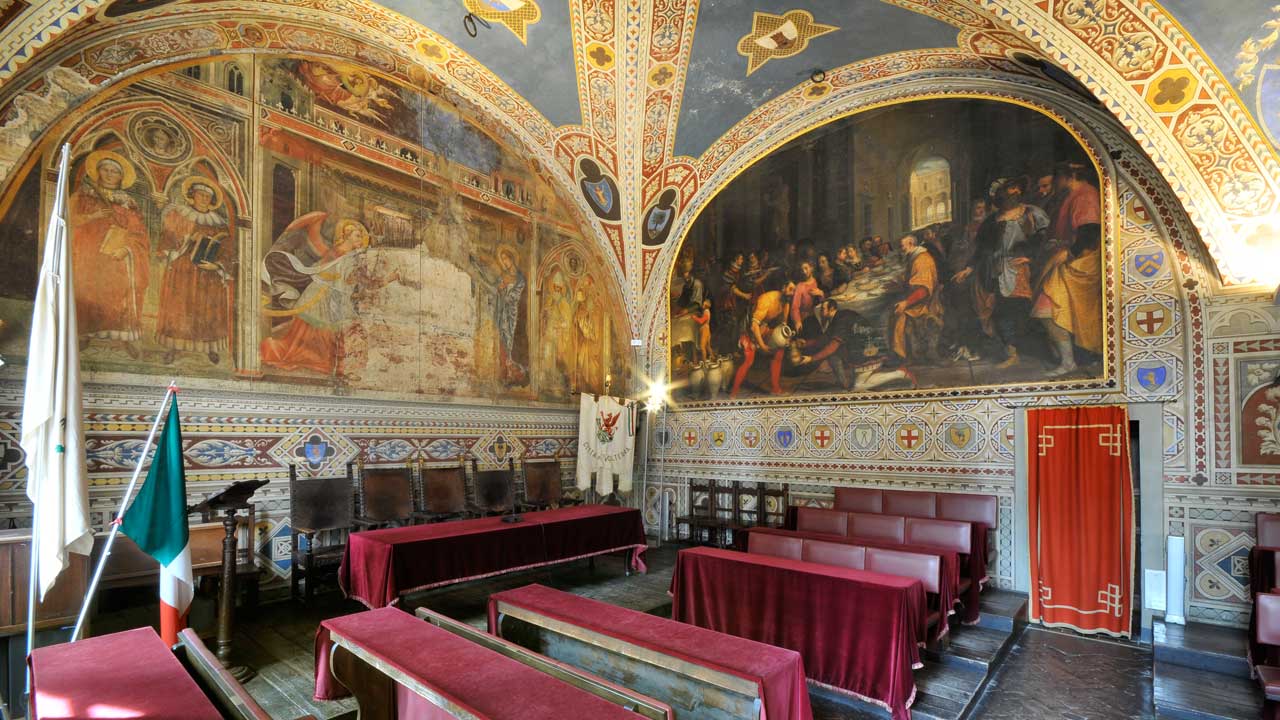 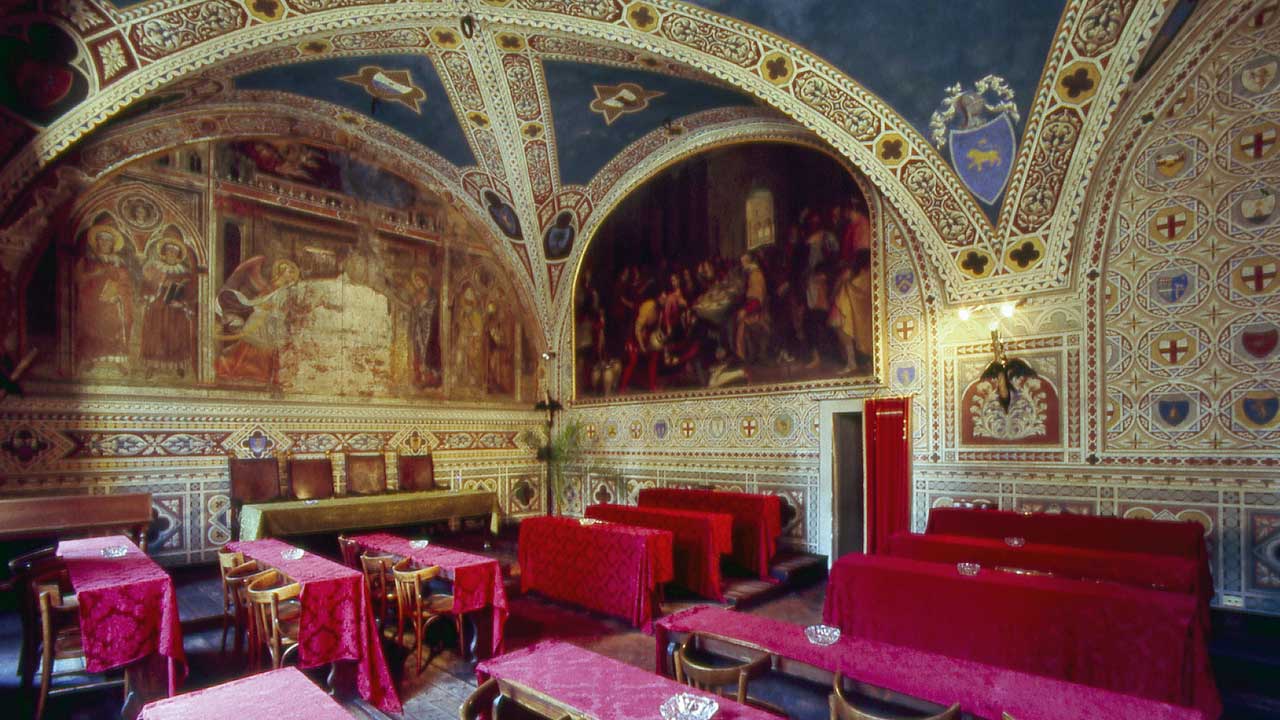 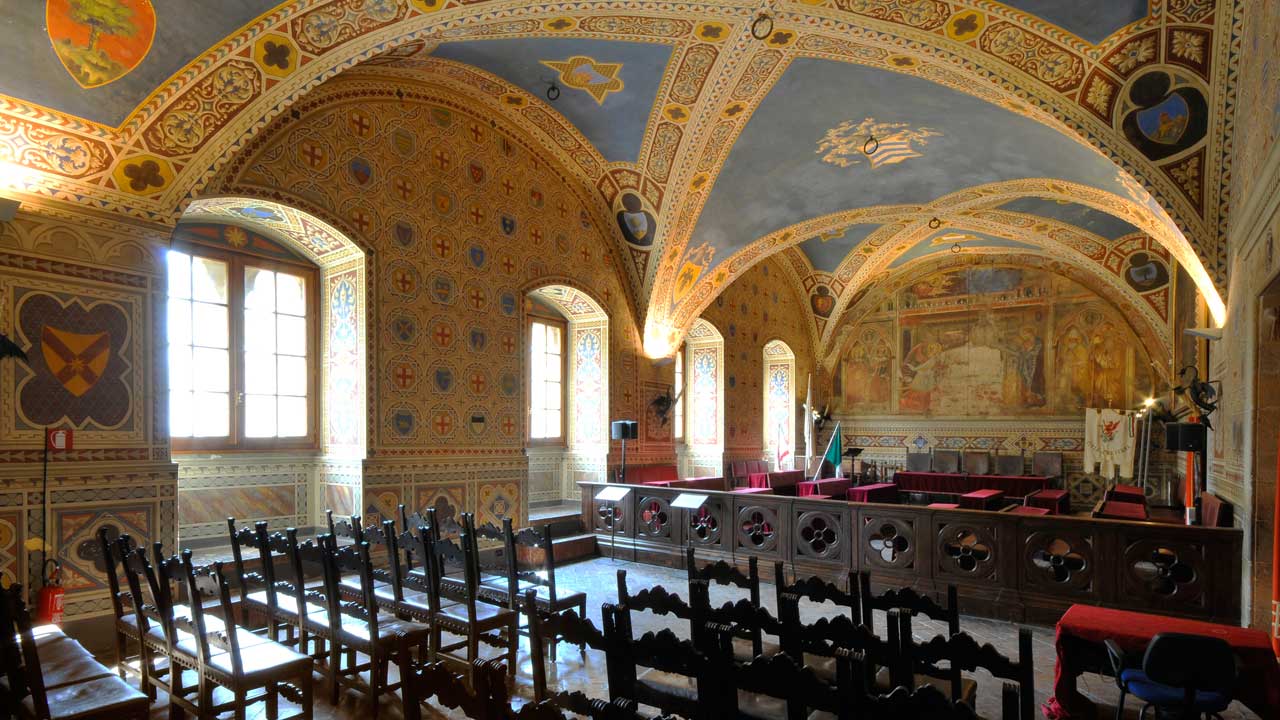 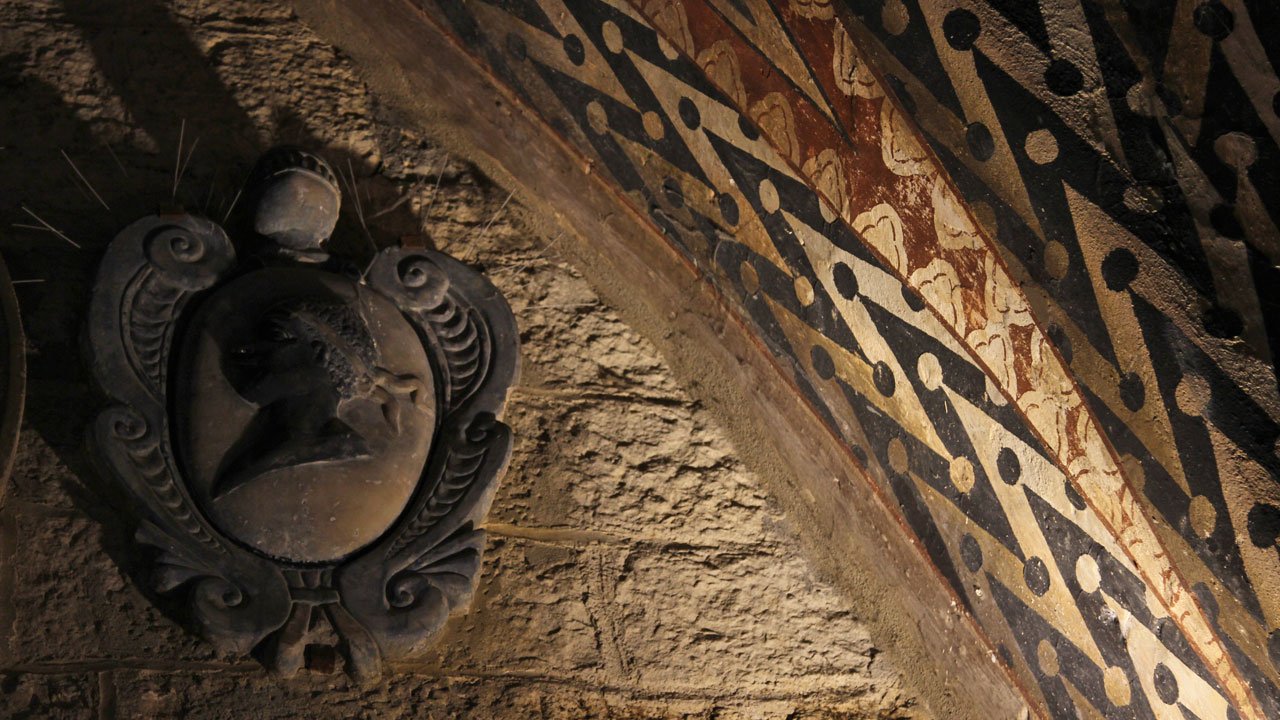 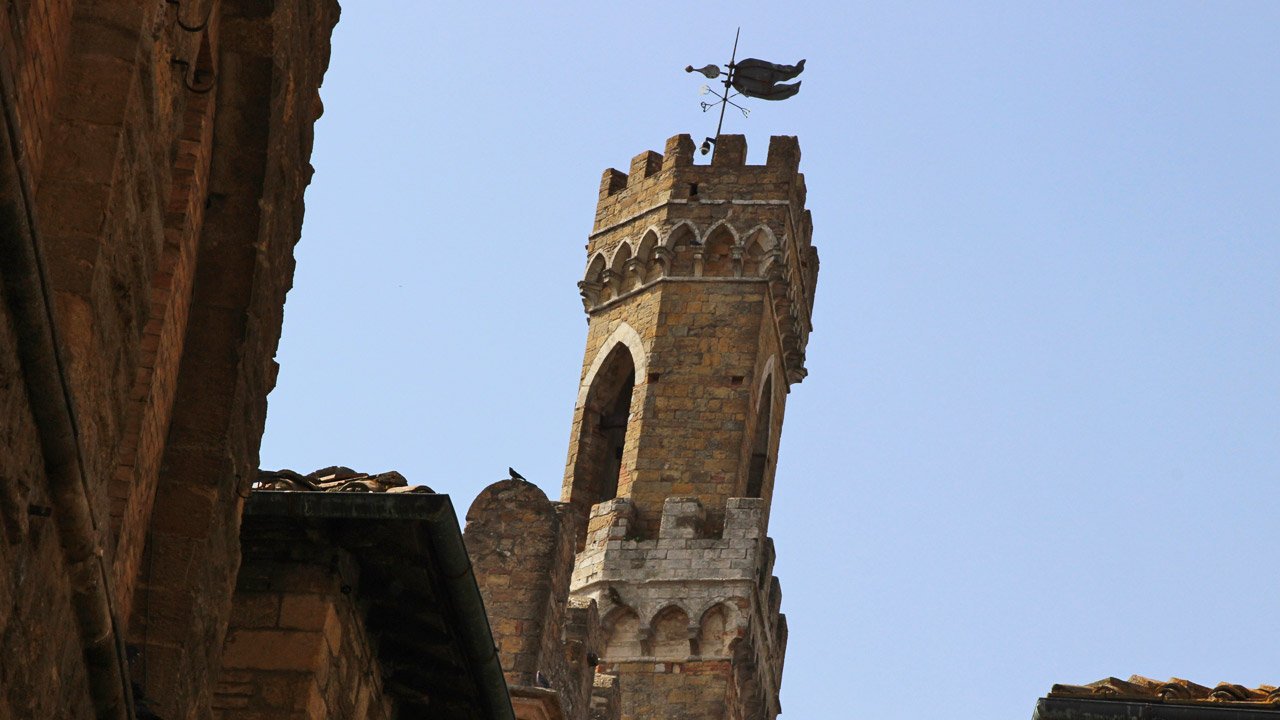 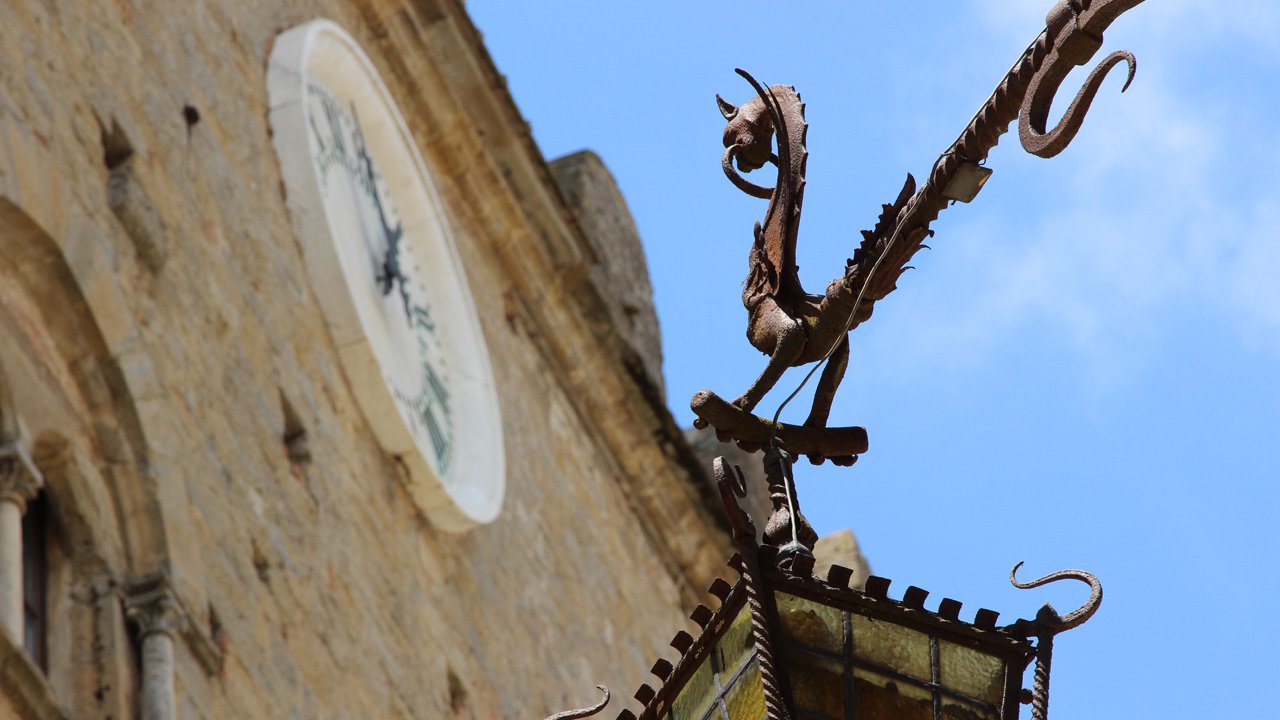 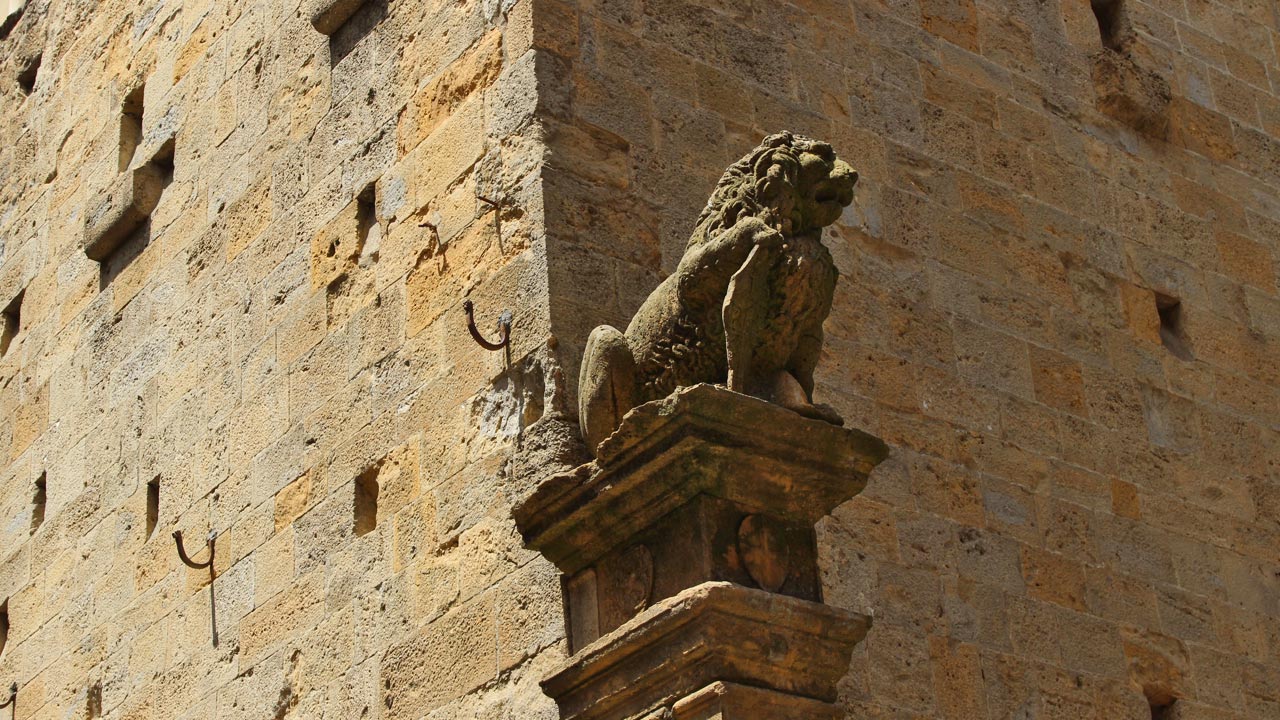