Volterra and Tuscany, the Etruscans’ home

Amongst one of the oldest museums in Europe, the Guarnacci Museum is home to a collection which is fundamental for the understanding of the Etruscans. Many famous and stunning pieces are on display here, for instance the beautiful and mysterious Ombra della Sera (Italian of “Shadow of the Evening”). It’s a must-see if you’re in the Valdicecina. 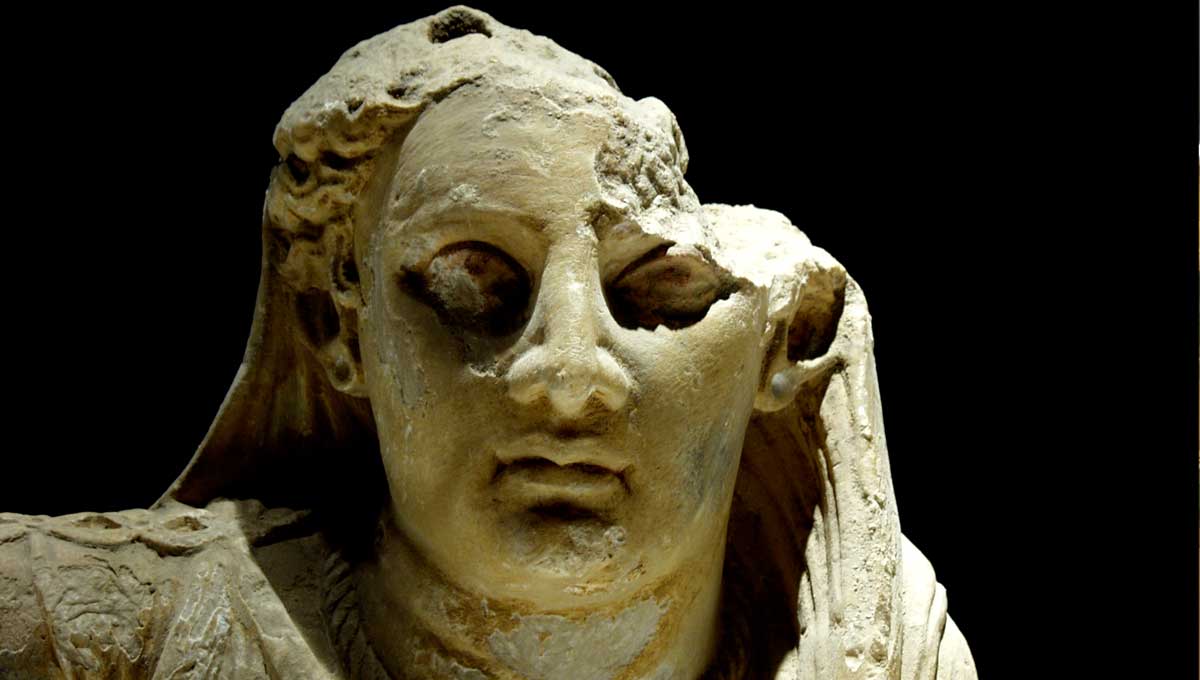 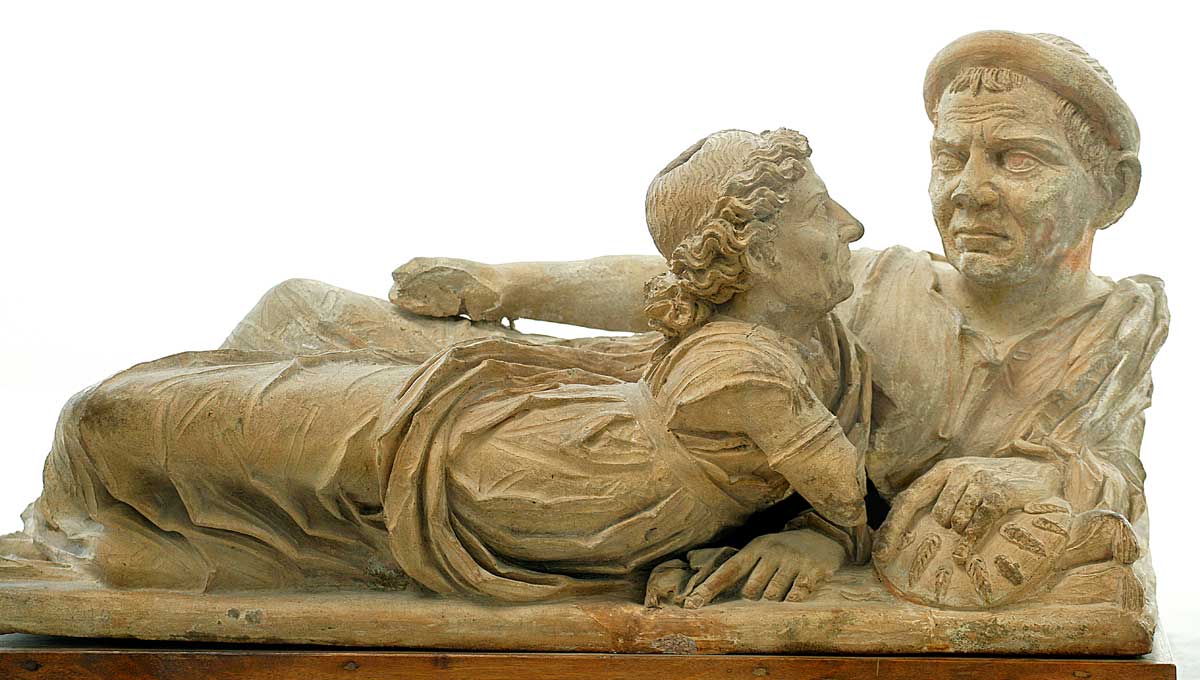 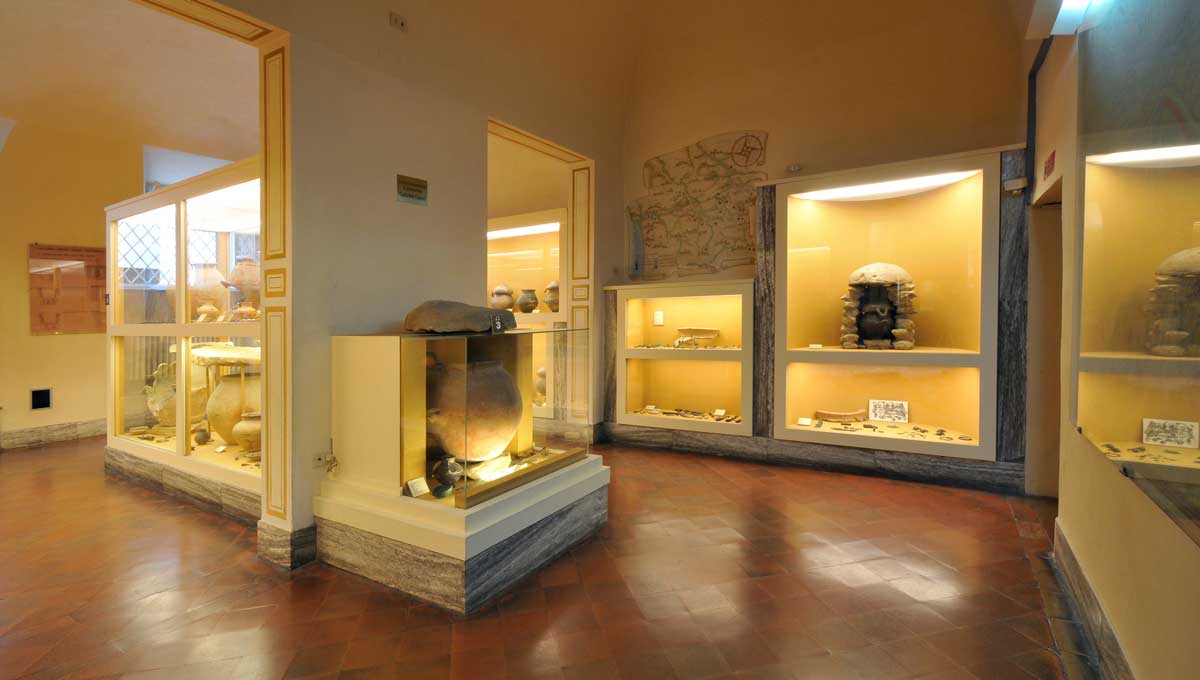 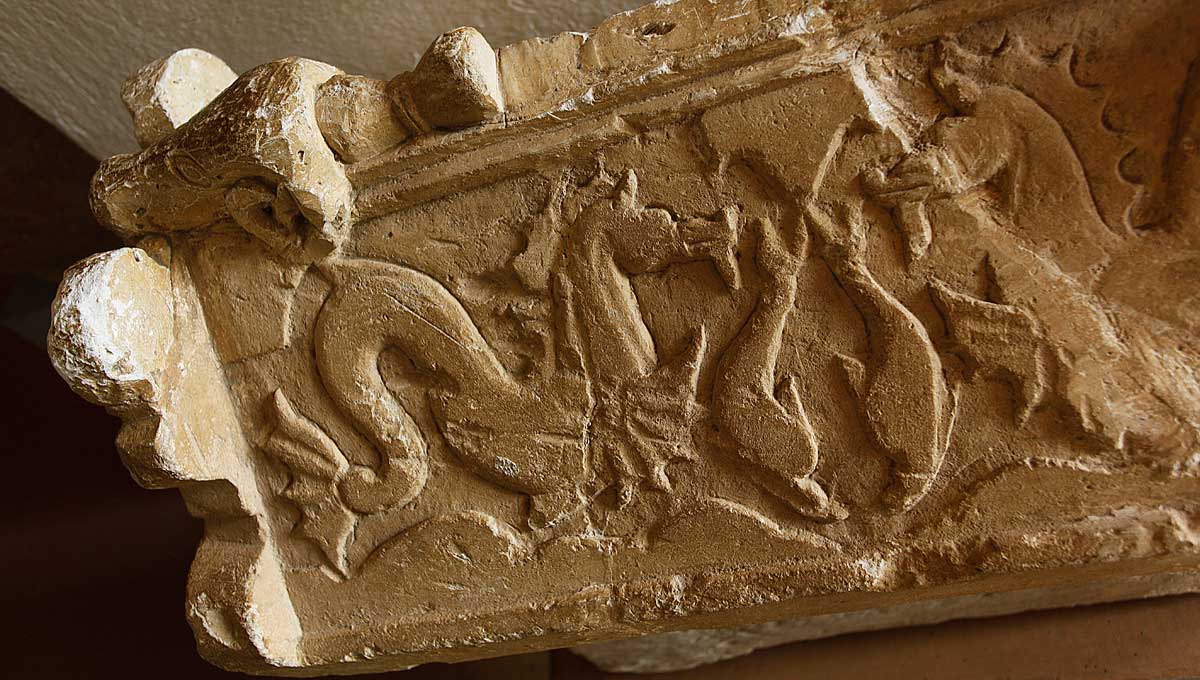 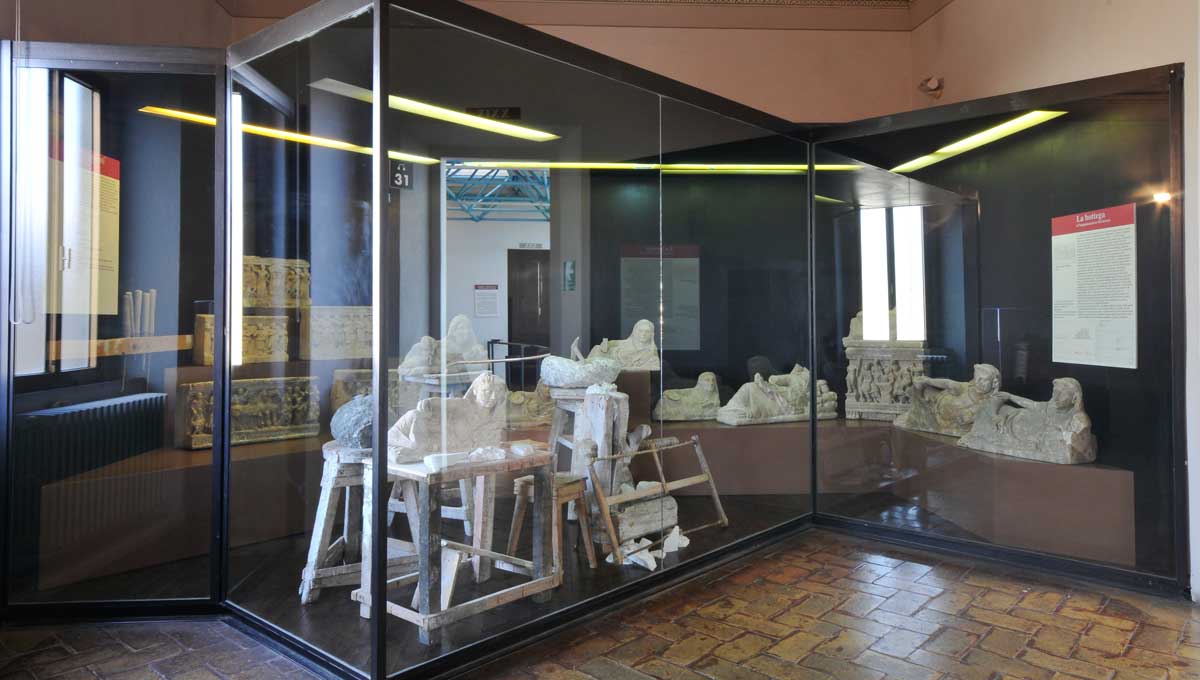 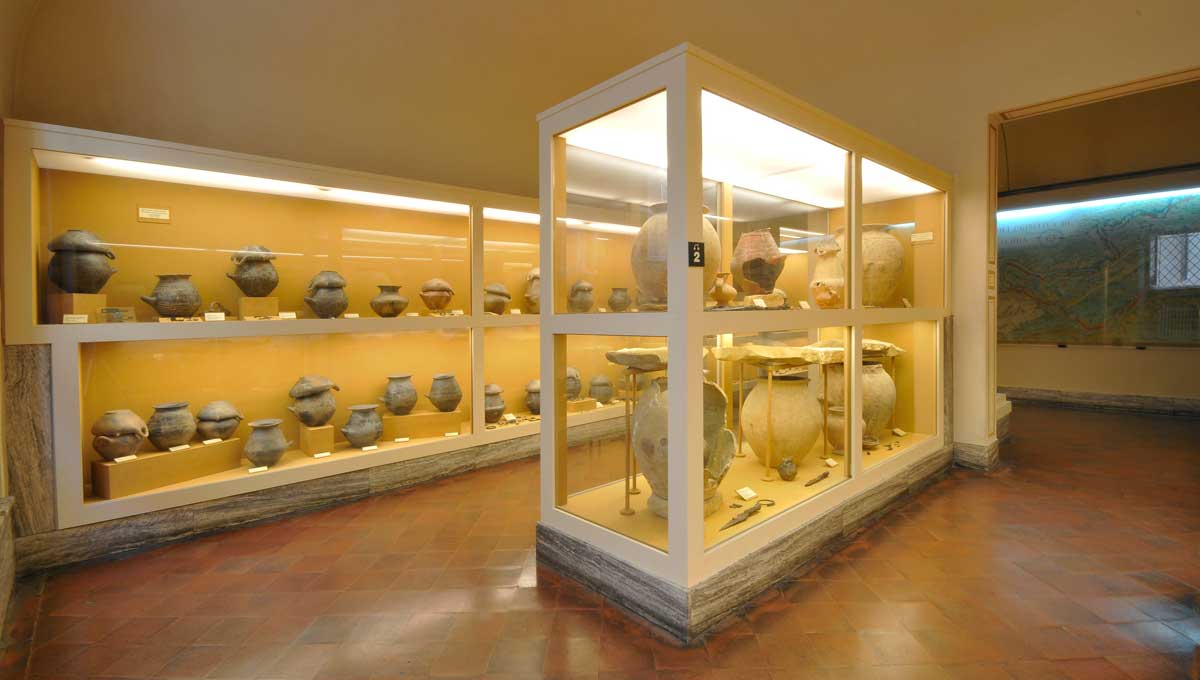 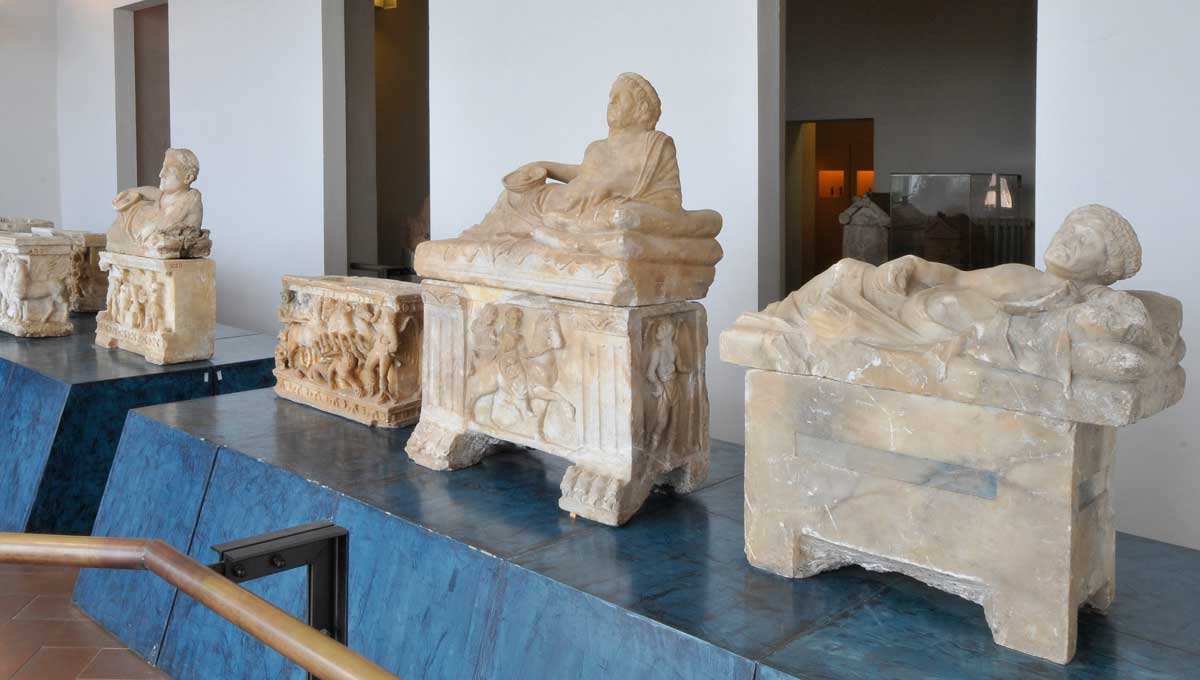 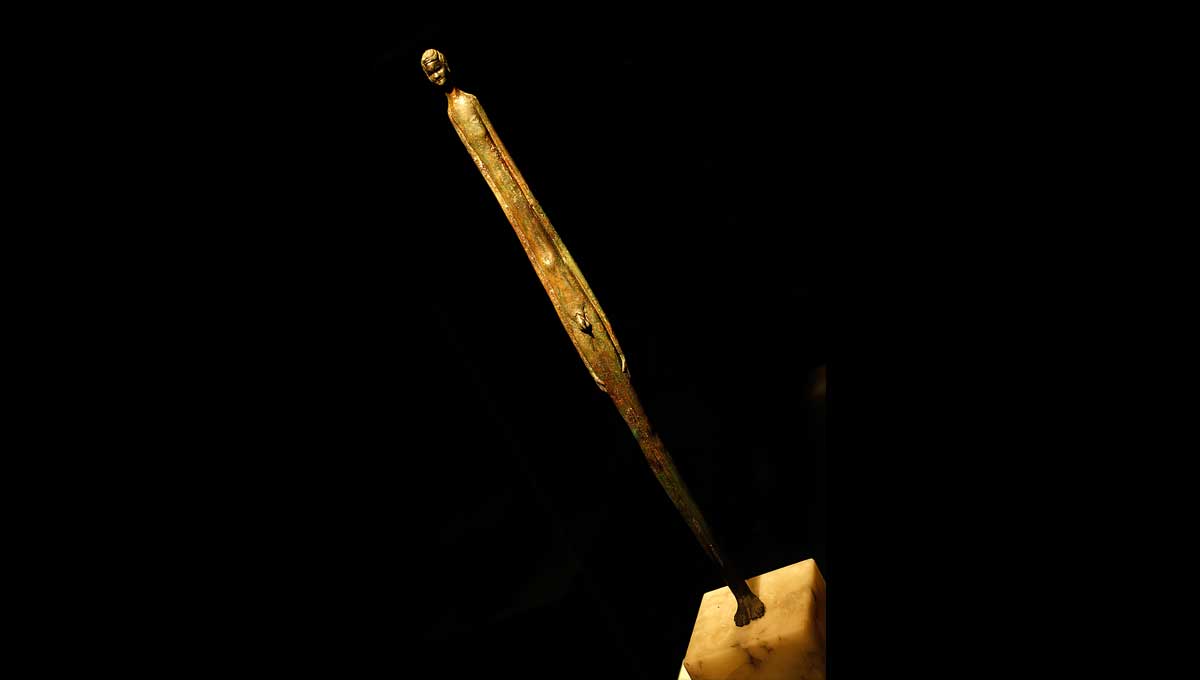 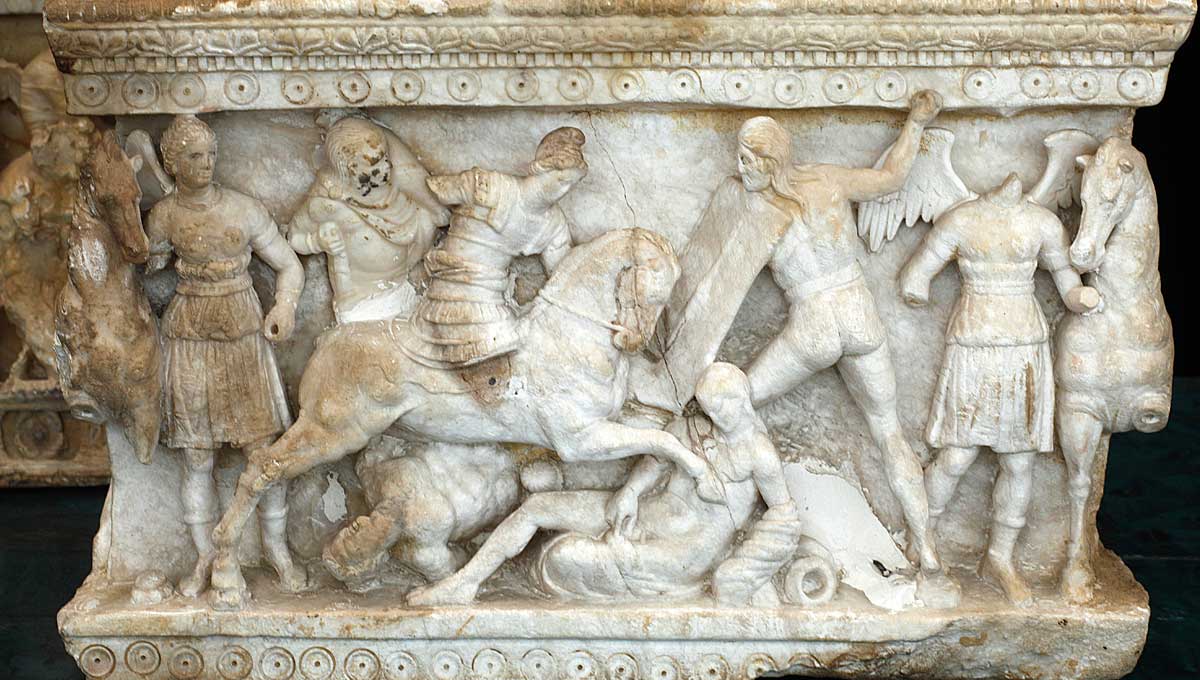 The Etruscans: explore their history at the museum

Discover the life, beliefs, ideas and objects of the ancient inhabitants of Volterra

If you’re not familiar with ancient history, you might think this is a contemporary artwork by an eclectic artist who idealizes shape and ignores proportions.
In reality this artifact, whose name is wrongly attributed to Gabriele D’Annunzio and “Shadow of the evening” in English, is not a unicum. It dates back to the 3rd century b.C., and it’s now a proper icon of the Etruscan time.
It’s an elongated bronze statue in the plastic shape of the shadow of a human figure at dusk projected on the ground.

There is no exact information on the date and place where this famous artwork was discovered.
Anton Filippo Gori, a scholar from 1700s Florence, saw it in Florence in a small collection of the Buonarroti house and published a sketch of it in the book “Museum Etruscum” (1737). In it, Gori stated its provenance from Volterra, although there are always plenty of legends around the origins of such singular artifacts.
The most famous story includes a French archaeologist who got caught in a thunderstorm while walking around Volterra. A farmer welcomed him in his house and let him sit next to the fireplace, while he kept the fire going with a long and tapered metal stick. One can only imagine the archaeologist’s surprise when he saw that the farmer’s poker actually was an Eruscan votive statue.

After 1750 Mario Guarnacci, who was in contact with Florentine antiquarians, got the statue by either buying or trading it and included it in the collection which then became the central piece of the Guarnacci museum.
One sure fact is that the statue was found in Volterra before 1737.

The statue, despite its singular execution and dimensions, isn’t an artwork on its own but it’s part of a series of elongated ex-votos representing haruspices and gods which is well documented in central Italy, particularly in the inner Etruria and in Lazio.
The precision detected in the facial features indicated an attempt at reproducing some exact features, which shows the influence of Greek portraiture from the 3rd and 2nd centuries b.C. The unconventional hairstyle on the statue also leads back to the same timeframe.

Anyway, we can’t but place this piece in the big and rather vague group of votive objects, which also includes all those objects experts can’t find right explanations for.
In his “Museum Etruscum”, Francesco Gori describes the subject of the Etruscan statue as a young god, maybe a spirit of the dead or Tagete, who was a naked male figure. However, this elongated body with an oval face, hollow eyes and a triangular nose framed by curly hair will remain nameless.

THE SARCOPHAGUS OF THE SPOUSES

Amongst the few terracotta urns in the museum, the lid of the Sarcophagus of the Spouses definitely stands out. This extremely suggestive sculpture is now, together with the “Ombra della Sera”, a symbol of the Guarnacci Museum.
The lid depicts a married couple laying on a bed, the way people used to at banquets.

Extreme technical skills can be detected in the realism behind the faces and the details of the clothing, which was also aided by the plasticity of the terracotta that was used, which is a material that allows for beautiful detailing.
Dating this artefact has been hard, but a recent interpretation looks at a vast array of historical and ideological elements. Many details indicate that this artwork wasn’t a part of a standardized production, but rather a commission by someone who wanted to be represented as “old-fashioned”. We are lead to this conclusion by two factors: the discovery of an iconography of the couple at a banquet, which represented the importance of family and copies of which date back to the oldest period of production of urns (end of 3rd century-beginning of 2nd century b.C.), and the material itself, terracotta, which was also used in the first production phase.

The faces of the two admittedly not so young spouses are extremely expressive, with their eyes meeting and the refined and detailed facial features.
The married couple’s eyes is what leads us to explore the mysteries of the Etruscan people.

THE COLLECTION OF ETRUSCAN URNS

The Etruscan Museum Guarnacci is home to the biggest collection of urns in Italy. These humble but significant products of Etruscan craftsmanship are sort of a way to bridge the gap between the past and the present.
They were re-used in the Middle Ages, then gathered and used as decor and construction materials during the Renaissance, and eventually re-discovered in the 18th century.

Many Etruscan urns from Volterra are now scattered in museums around the world, such as the British Museum and the Louvre, as evidence of the Etruscan people.
In its classic form of a vessel for the ashes of the dead, the Etruscan urn replaces the perishable vessel made out of leather or fabric with a long-lasting material such as alabaster, terracotta or stone. This evolution of the urns in Etruria goes hand in hand with the story of the Etrscan people itself, going from the early Iron Age to when the Romans took over.

These urns were located in the Etruscan burial grounds, the necropolis. The area around Volterra is particularly rich in necropolis, but the only few tombs left are in the Necropoli dei Marmini.
The production of urns with lids with a human shape started at the beginning of the 3rd century b.C. An older type of urn is the one in the shape of a house.
The vast collection of urns starts on the ground floor of the Museum and continues on the upper floors.
The urns are the most authentic examples of local artistic expression from the time between the 4th century b.C. and the start of the Roman Imperial Age.

The urns are carved in tuff or alabaster, materials that come from Volterra’s countryside, and only some of them are molded with terracotta. Apart from the simpler ones in the shape of a house or a temple, the lid of the urn usually depicts the deceased laying on their left side on a bed of a banquet.

In the case of men, the statue of the deceased would hold a vessel for libations or something to write on or with. Women, however, would hold objects such as mirrors, fans and pomegranates, which were the symbol of fertility. The statue’s head is proportionally way bigger than the body, and it emphasises the deceased’s facial features. Some of the lids were simply part of a mass production, others were proper portraits, where the realism would highlight the expressive power of the statue.

The urn box is sometimes historiated, and the urns in the Guarnacci Museum, which are more than 600, are categorized according to the subject on the front of it.
Many different patterns are used, the more simple ones depicting flowers, symbols, animals or scenes from the Etruscan everyday or religious life.

The most interesting ones are undoubtedly the urns depicting mythological scenes. Despite having Greek origins, these scenes are so varied and include so many local elements, that they definitely express the Etruscan culture. Alabaster was sometimes used for the precision in the execution, which is very much visible in some mythological scenes, where this material allows the artist to make it look like the subjects are detached from the background.

Some of the main themes found in the artworks on the urns are funerals and the passage to the underworld.
Then there are many mythological scenes such as the legend of the Minotaur, the centaurs, the Calydonian boar, Perseus, the Theban Cycle and the Epic Cycle.
This is a unique collection that allows us to explore and discover the mysteries of the Etruscan people.

The evocative “modernity” of the elongated shape of the Ombra della Sera or the unsettling look of the two old spouses portrayed in the Urna degli Sposi (Italian for “Sarcophagus of the Spouses”) are worth your visit to the Guarnacci Museum, one of the oldest public museums in Europe.
The beautiful “palazzo” hosting the exhibit on the Etruscan and Roman past of Volterra, the furniture in some of the rooms and some criteria of the exposition are also part of a particular way of making culture.

As a matter of fact, visitors may feel like they are in a museum with two faces and two souls: an old one, visible in the rooms with old furniture and many objects placed next to each other just because they’re made out of the same material; and a contemporary one, visible in more modern rooms, with only a few, significant items and their captions and information panels.
The museum was set up in the mid-1700s, when experts started focussing on studying and researching Italy’s past, and when Volterra was a real cultural capital.

It’s also one of the oldest and most important Etruscan museums in Italy. It gathers and conserves most of the items discovered in Volterra and the area around it.

The main part of the museum is its collection of about 600 Etruscan funerary urns, built to collect the ashes of the deceased. The production of these urns started in Volterra between the 4th and the 1th century b.C. and involved different materials, such as terracotta, stone and alabaster. The more important urns are in alabaster, an easy-to-model material also suited to being painted. The most famous items of the museum are the Ombra della Sera, an Etruscan small bronze with a characteristic elongated shape, the Stele of Avile Tite and the Sarcophagus of the Spouses.