The Church of San Biagio in Montecatini Val di Cecina

is a romanesque-gothic style

The church was erected in 1356 under the patronage of Ugolino Guducci and Ciullo Barletti. It was consecrated in 1361. In 1421 the parish church of Gabbreto, then in ruins, was transferred along with its baptistry to San Biagio. The belltower was built between 1463 and 1467. In addition the choir was frescoed by an anonymous Sienese painter commissioned by Nicola Nieri of Montecatini Val di Cecina.

Between 1514 and 1576, construction of canon’s quarters led to sealing of the original facade. Flanking the main altar are two marble angels, called “ciechini”, attributed to Mino da Fiesole. In the niches above the choir are two terracotta statues by the studio of Della Robbia, bepicting Saints Blaise and Sebastian.

In 1787, with the deconsecration of the Oratory of Camporciano, the statue of the Madonna di Camporciano was moved here. 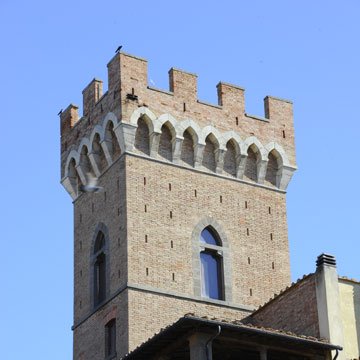