The art in Volterra

A collection that traces and shows the great painting in Volterra 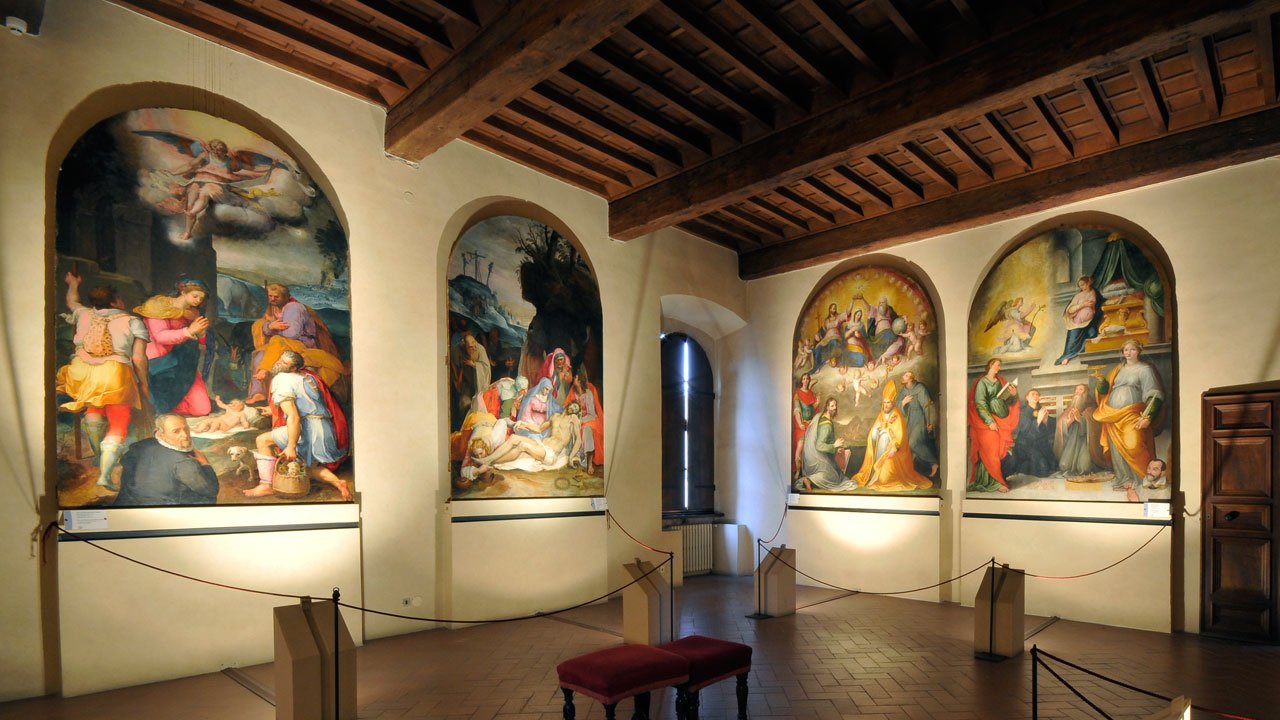 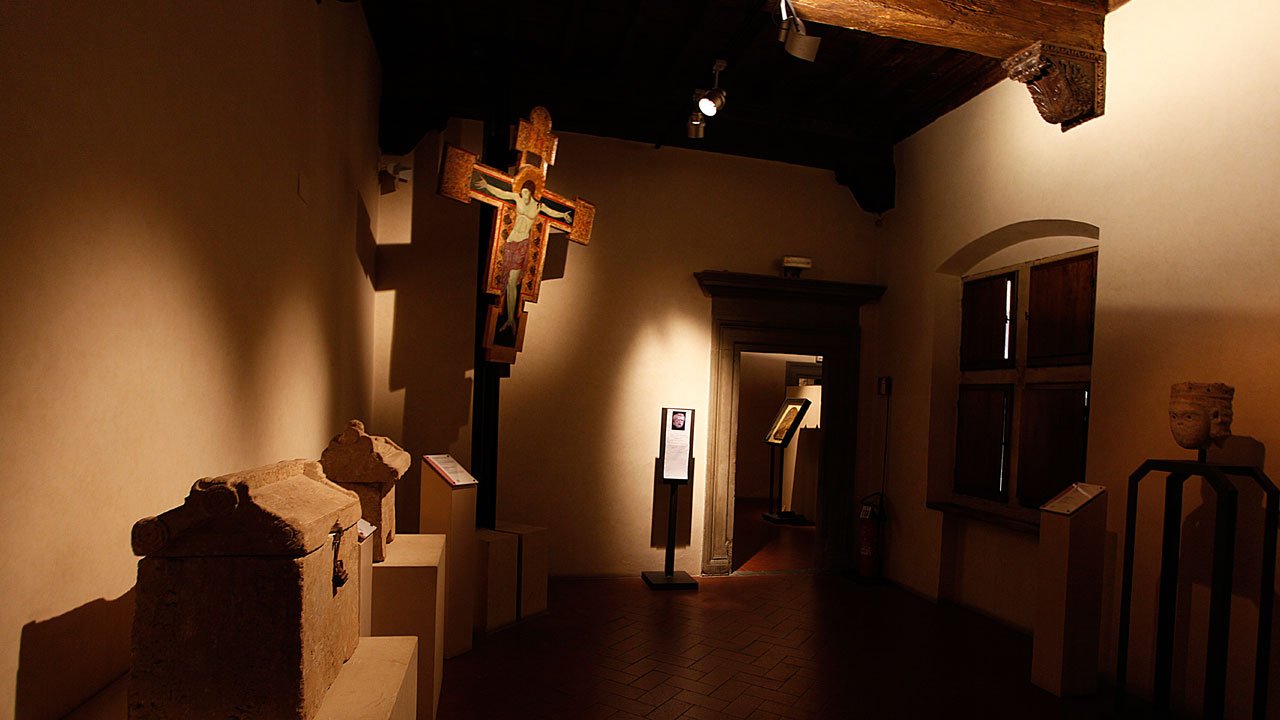 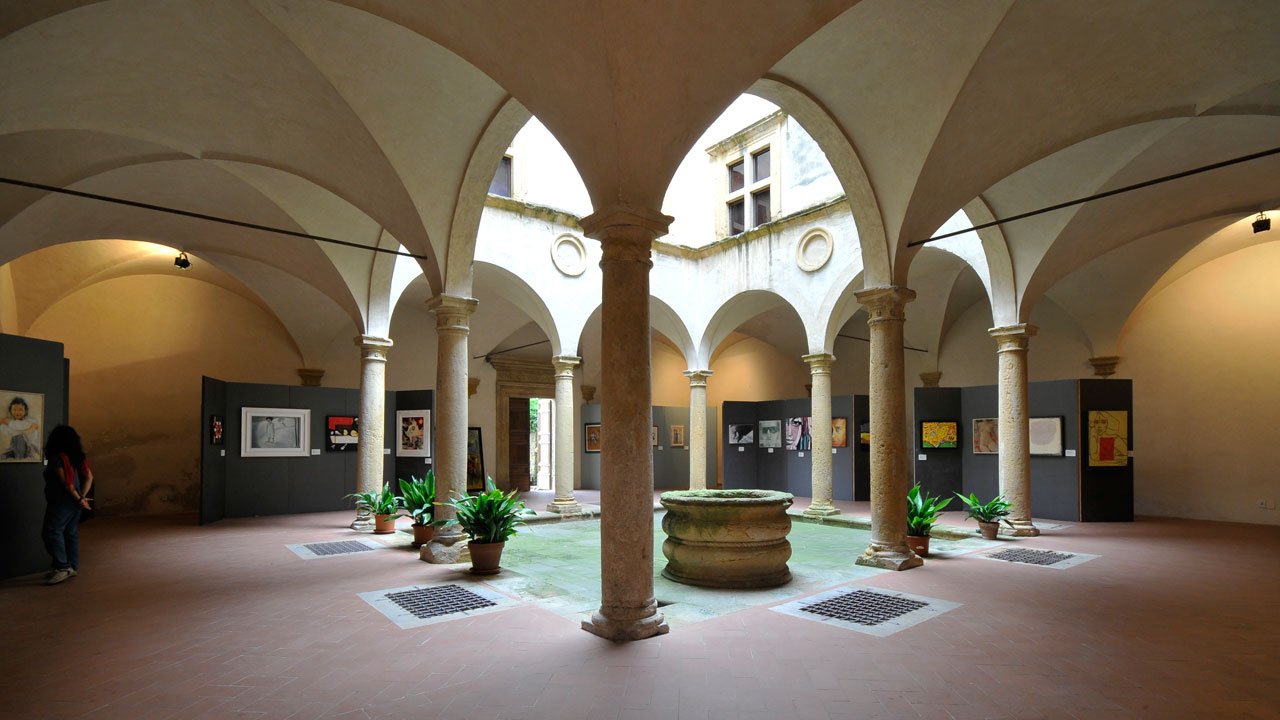 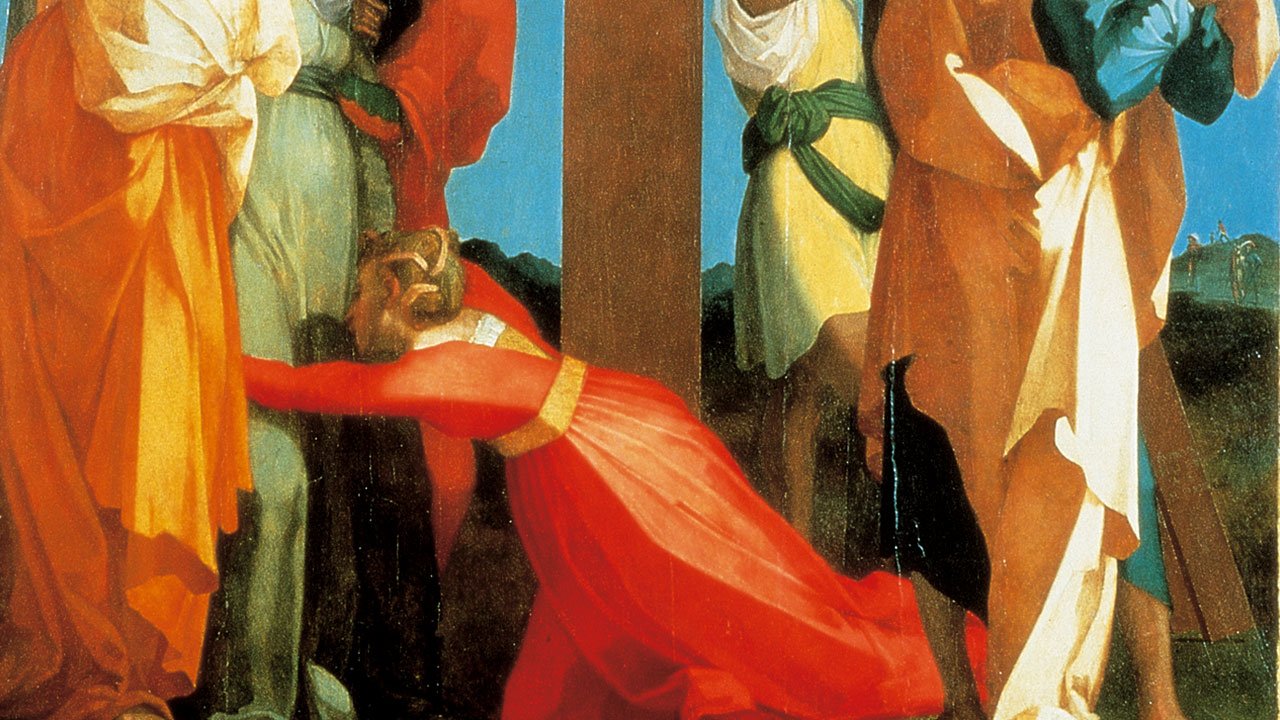 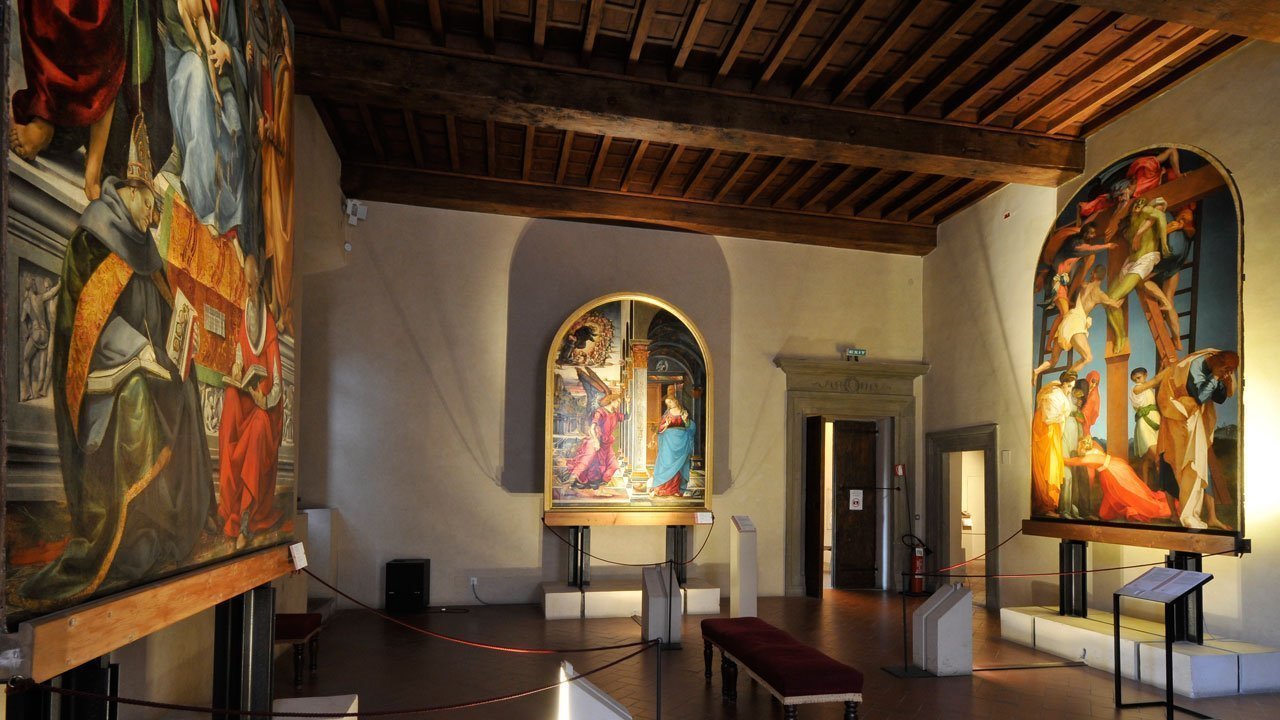 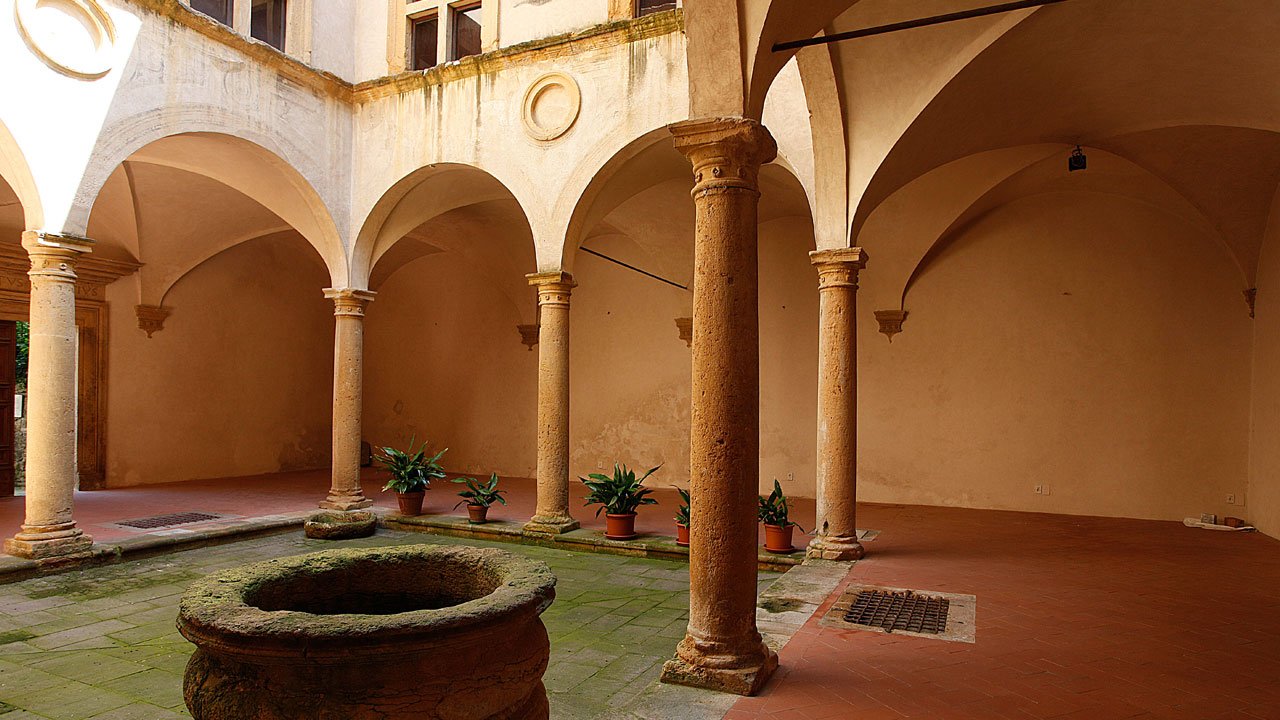 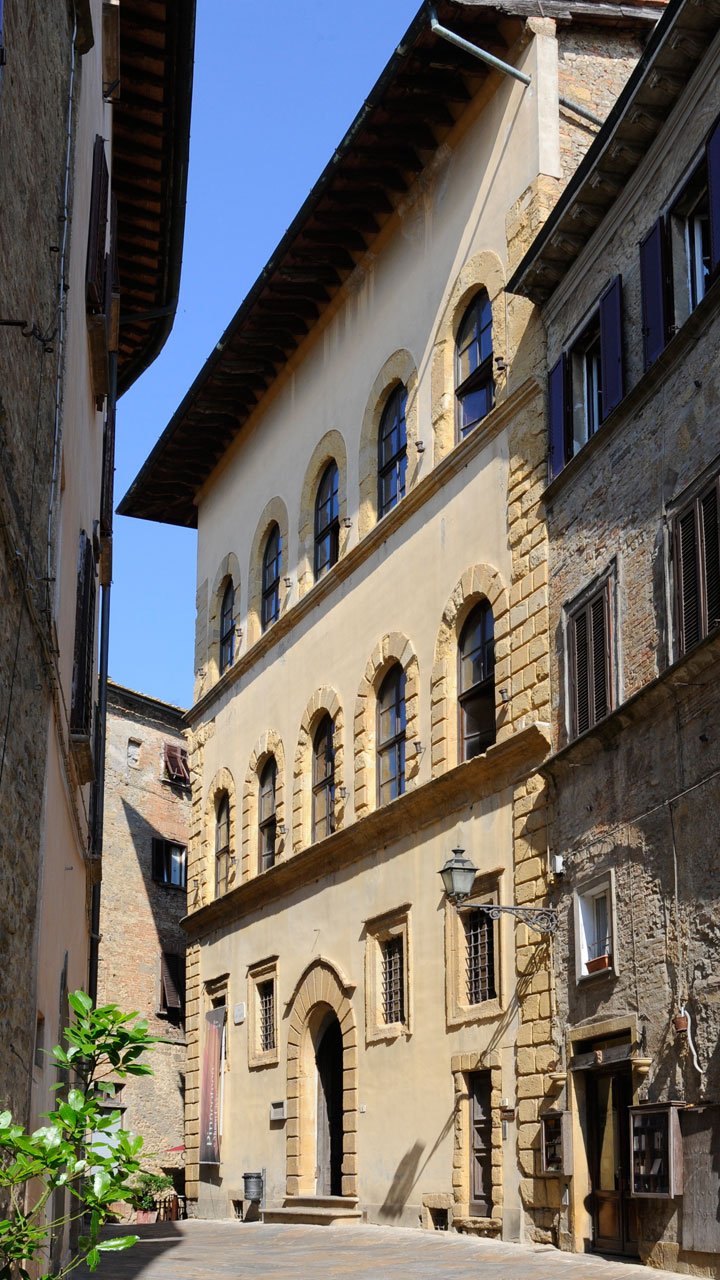 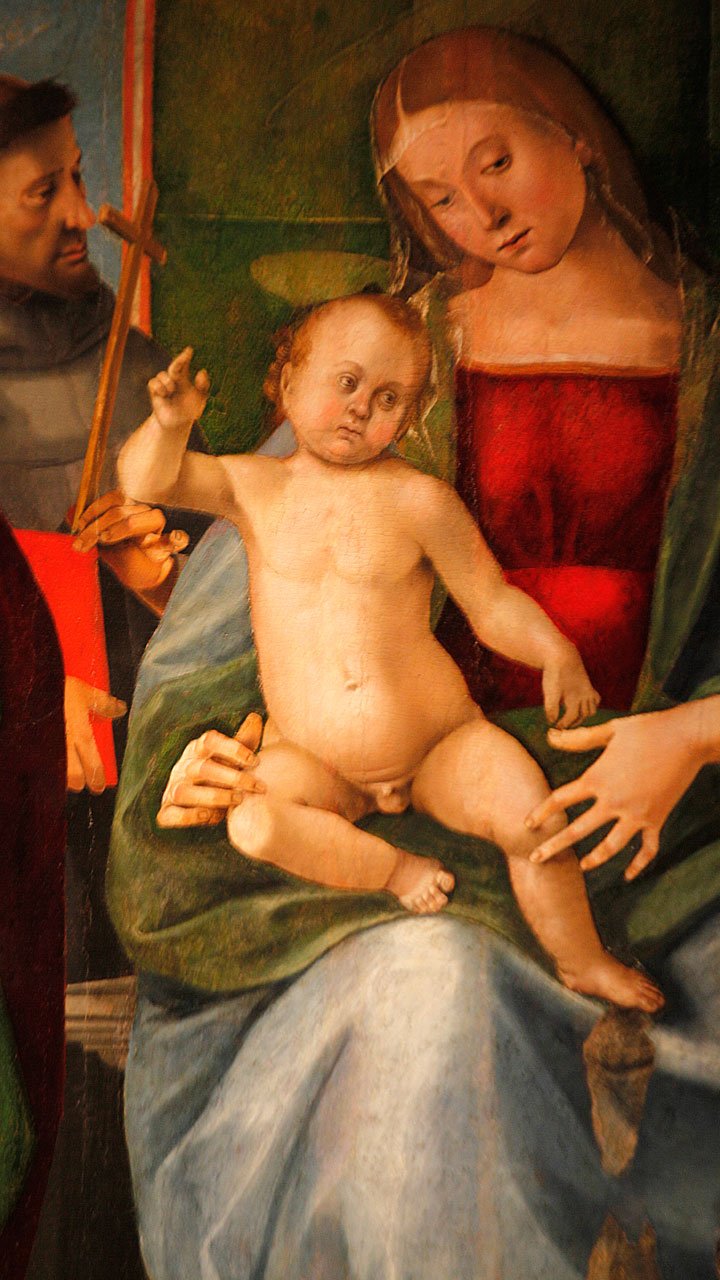 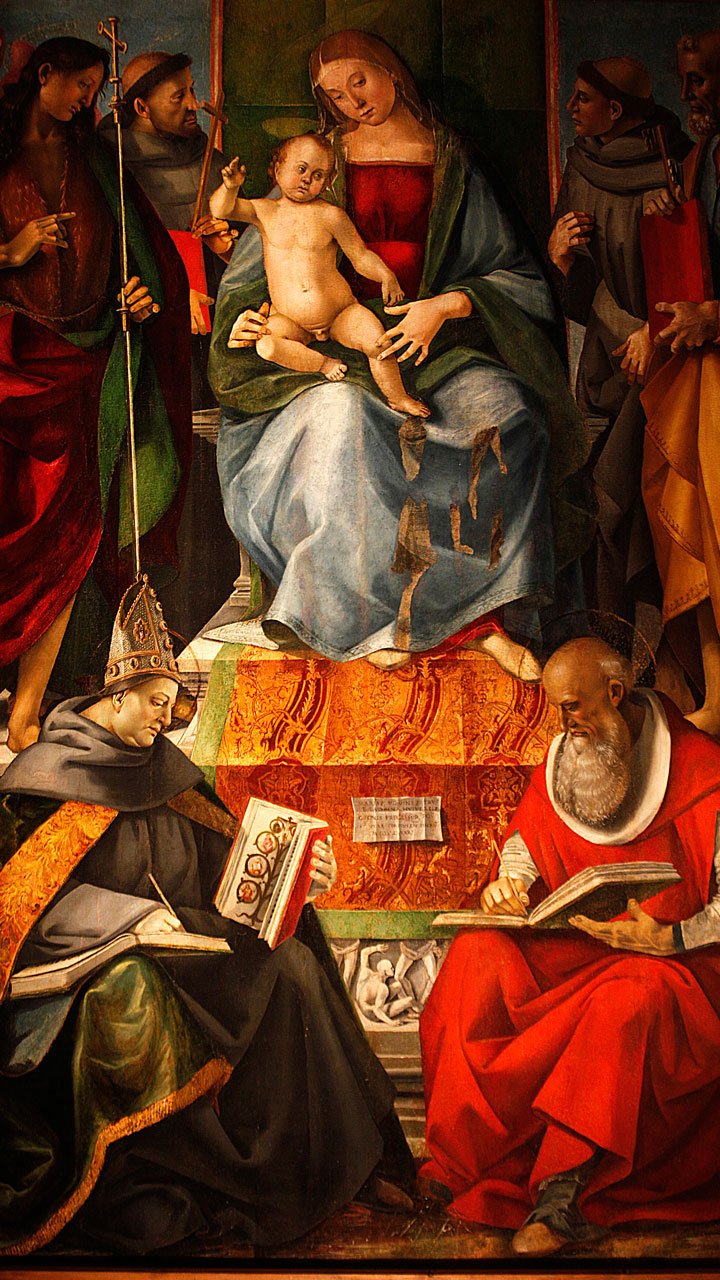 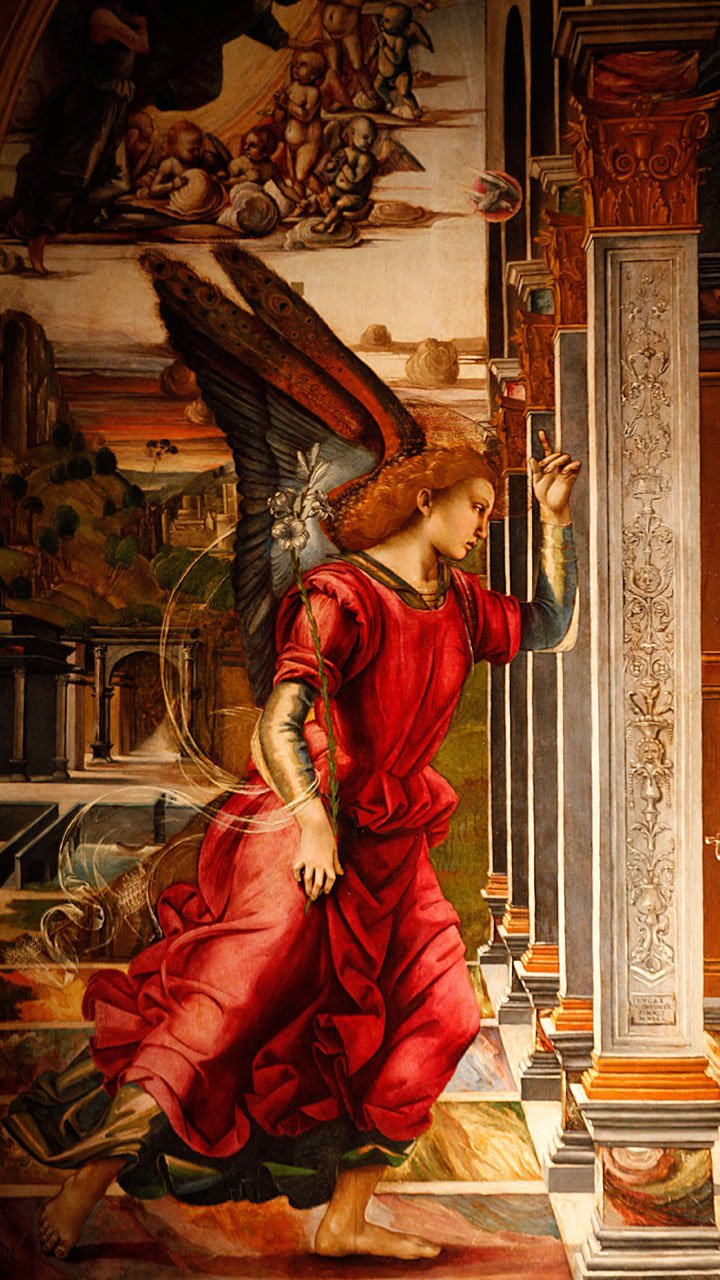 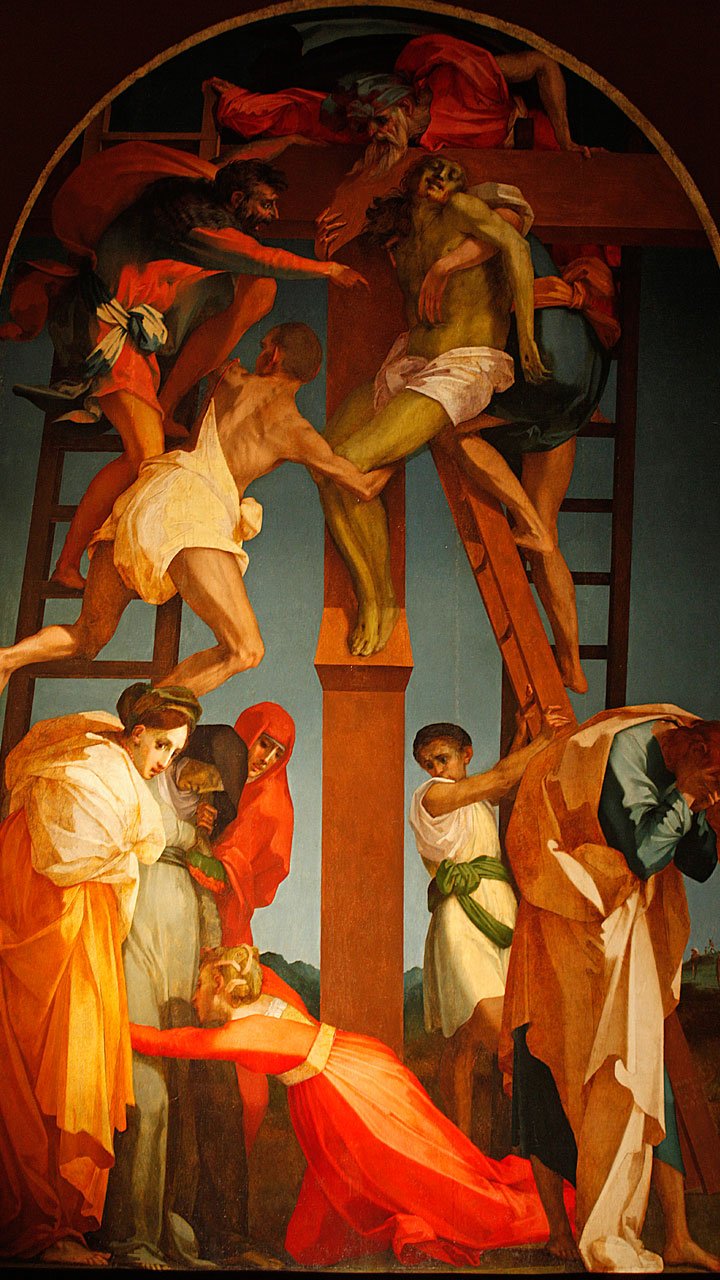 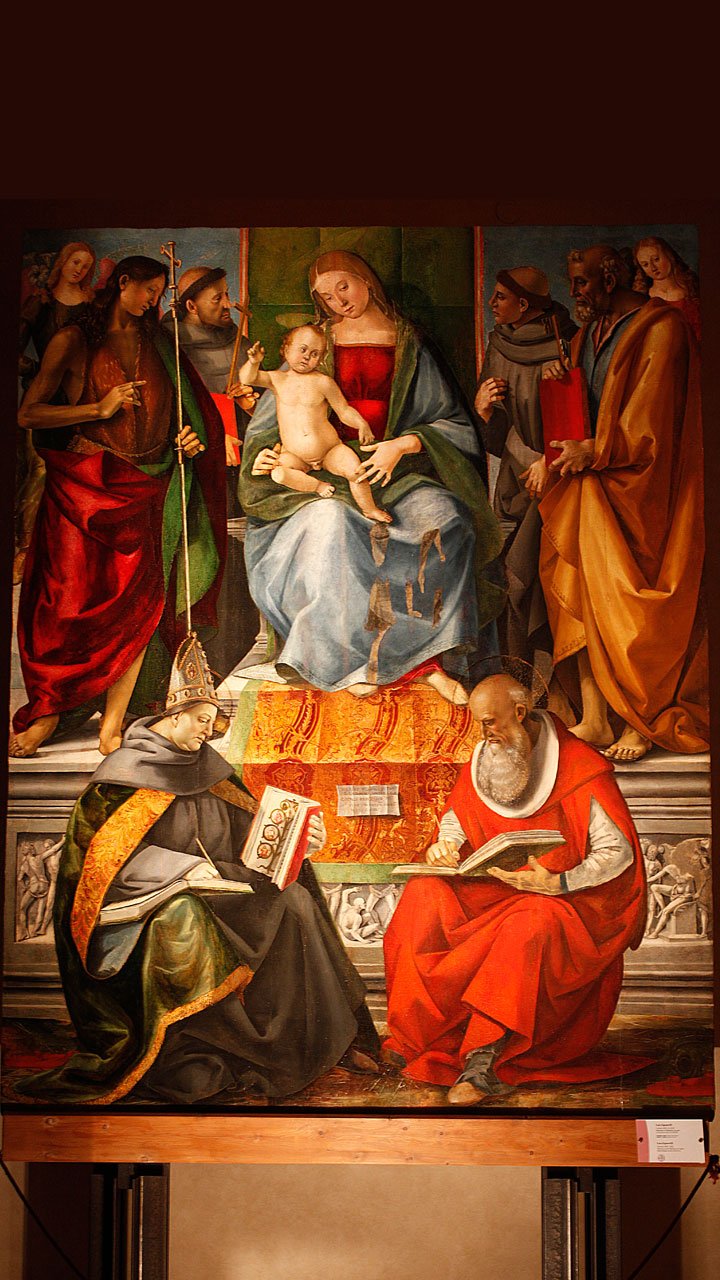 Art Masterpieces at the Pinacoteca Civica

DESCENT FROM THE CROSS - Rosso Fiorentino

The work was painted by Rosso Fiorentino in 1521 for the chapel of the Croce di Giorno, annexed to the church of San Francesco in Volterra. The date coincides with that of the panel painted for the parish of Villamagna, today in the Museum of Holy Art, and this would indicate at least a short stay in Volterra by the artist. A rather restless painter, he combined the refined details of Andrea del Sarto and Fra Bartolomeo with great angular and faceted folds, harsh colours and hallucinated faces. The large Descent from the Cross, an entangled and bizarre composition, shows elements of various styles, including those of Michelangelo, Fra Bartolomeo, Andrea del Sarto, Piero di Cosimo and Dürer; the latter, known through prints, inspired the figure of the old Nicodemus, leaning over the horizontal arm of the Cross.

The agitated movement of the figures, who move like acrobats on equipment in the upper part following the principles of a serpentine, is counterbalanced by the constant rhythm of the steps of the ladders. On the right a weeping St. John, in a similar position to that of Eve expelled from the Garden of Eden in the Sistine Chapel, woman on the left whose face is illuminated by the light. The idea of space is taken from the Descent from the Cross by Filippino Lippi dated 1501, but the figure of Christ is clearly inspired by the Piety by Michelangelo in St. Peter’s in the Vatican, while the figure with a girdle on the stairs is a copy of the nude in the foreground of the cartoon of the Battle of Cascina.

From the chapel of the Disciplinanti in the Duomo of Volterra, the panel was painted in 1491 .
An open gallery in perspective forms the central division of the scene where the sudden arrival of the angel is counterbalanced by the gesture of the Virgin in the act of withdrawing; all the other elements harmonize with the upward movement of the composition.
Of Signorelli’s works done in Volterra, there remain the Circumcision in the National Gallery of London, from the Oratory of the Santissimo Nome in the grounds of San Francesco, and the fresco of St. Jerome in the Palazzo dei Priori.
Other works are now lost, such as the predella of the Annunciation, that of the Sacred Conversation, a Crucifixion from the church of Sant’Andrea in Posterla, the predella of the Circumcision,
and two panels with St. John and St. Paul, documented in the church of San Francesco.

The perspective of a luminous, imaginary landscape, rich in details in the Flemish manner, creates the background for the clever architectonic positioning of the figures in the foreground: Saints Attinea and Greciniana and Saints Benedict and Romualdo.
The panel painted in 1492 for the church of the abbey of San Giusto. Is considered the last great work from the workshop of Ghirlandaio. One of the most famous and most active of the late-15th century in Florence. A refined illustrator of the serene and civilized life in Florence under Lorenzo the Magnificent, Ghirlandaio assimilated in his painting the sense of measure and order typical of the Florentine tradition, combined with a personal spirit of observation strengthened by his acquaintance with Flemish painting.

In this splendid painting, the figure of Mary Magdalen who throws herself at the feet of Christ recalls the Piety by Fra Bartolomeo in Palazzo Pitti; while in the figure of St. John facing the right, the influence of Andrea del Sarto can be traced.
An acquaintance with the drawing of Dürer is especially evident in the landscape with the hill crowned by trees, the sepulchral grotto, the view of Mount Calvary with the three crosses and a walled city. Moreover, the falling arm of Christ recalls the Piety by Michelangelo in St. Peter’s.

It keeps important paintings and art collections among

which the Deposizone (Deposition) by Rosso Fiorentino

The origins of the Volterra Art Gallery date back to 1842 when Luigi Fedra Inghirami, who worked in the cathedral, began to collect works of art from various disused churches and monasteries of the city. He gathered the work in the chapel of San Carlo which adjoins the cathedral.

In 1905, following a proposal by Corrado Ricci, a municipal art gallery was arranged on the second floor of the Palazzo dei Priori. The more significant works of art from the chapel of San Carlo were exhibited along with other pieces belonging to the city council and to various other institutions of Volterra.
Since 1982 the Art Gallery or Pinacoteca is housed in the Palazzo Minucci-Solaini, a splendid example of late 15th century architecture traditionally attributed to Antonio San Gallo the Elder.
Today the Art Gallery, which represents the most important section of the collection, is complemented by the Municipal Museum.

The scope of the latter is to conserve and exhibit important works of art belonging to institutions which are no longer able to provide adequate care. The Deposition by Rosso Fiorentino is the most significant work from the collection. Other important works in the collection are paintings by Taddeo di Bartolo, Alvaro Pirez and Cenni di Francesco, the Pietà by Francesco Neri of Volterra, a predella of the story of the Virgin by Benvenuto di Giovanni, two wooden sculptures by Francesco di Valdambrino, an altar piece of Christ in Glory by Domenico Ghirlandaio and the Holy Conversation and the Annunciation by Luca Signorelli from Cortona. There is also a noteworthy collection of medieval sculpture and ceramics, of medals (especially the Medici collection) and of coins.
The Art Gallery organizes conferences, seminars and temporary exhibitions in collaboration with other institutions, with particular attention to the city’s cultural heritage. Didactic activity aimed in particular at schools, offers guided tours of the museum for students at every level.